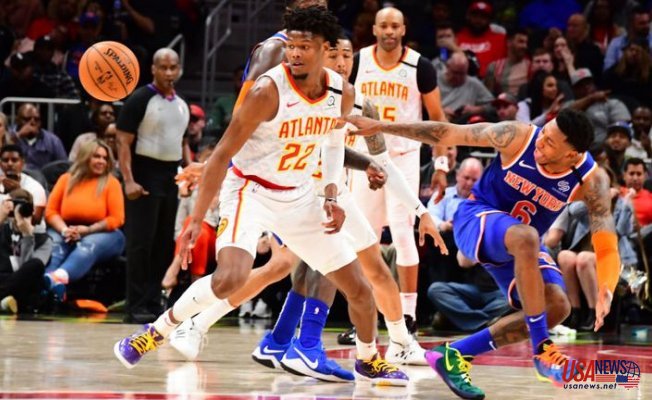 Few sports franchises — whether in the NBA or elsewhere — have toiled in as much misery as of late than the New York Knicks. But unlike other bottom-feeder franchises in different leagues, the Knicks’ woes have been especially visible given they play in the biggest U.S. market and carry a level of prestige not easy to find.

Since the turn of the century, the Knicks have qualified for the playoffs just five times. All but one of those times ended in a first-round elimination. The team has run Hall of Fame-level talents out of town — Carmelo Anthony and even retired, fan-favorite Charles Oakley. Its owner, James Dolan, is seemingly public enemy number one in the Empire State.

But oh my how things have changed over the past five months. New York is the winners of nine straight and is currently seven games above .500. If the season ended today, they would have a home-court advantage in the first round of the playoffs. Its NBA Finals odds have swung the wildest from preseason until now, per NBA betting sites online. Most of all, the Knicks are flat-out fun to watch again.

How did this almost overnight turnaround happen and could it be the start of something greater? Let’s turn back the clock to get answers.

It Starts With Tom Thibideau

Dolan has cycled between 14 different head coaches since 2000, but it’s starting to feel like the current one, Thibideau, is the right man for the job. Before New York, Thibs proved himself in stops with Chicago and Minnesota, accumulating a win percentage of nearly 60 percent in both.

In year one with the Big Apple, Thibideau has these Knicks playing like his teams of old: hard, tough, and disciplined. Not only is New York revitalized, but so is the 63-year-old coach, who is the front-runner to be named NBA coach of the year.

Thibideau’s biggest contribution to the Knicks has been defense. You hear it time and time again, defense is as much about effort as anything else. Welp, Thibs has the roster working hard on the defensive glass. In terms of defensive efficiency, New York ranks fourth-best across the league.

A complementary mix of young and old players is contributing to Thibideau. The up-and-comers include RJ Barret and Mitchell Robinson. For the experience, there are ex-Bulls mainstays, Derrick Rose and Taj Gibson, who previously played for Thibs. There’s also Austin Rivers and Reggie Bullocks. All four veterans are averaging at least 20 minutes per game this season.

But no Knicks player has improved more under Thibideau than Julius Randle. Six years into his career, Randle is blossoming into the player many expected when he was drafted seventh overall.

New York could be racking up the hardware at the year-end awards. Like This, Randle is a favorite in his own category — the most improved player of the year.

Almost out of nowhere, Randle has become a sharpshooter. He’s averaging 24 points per game on 46 percent shooting. Even more, from the three-point range, he’s knocking down almost 42 percent of his shoots. Up until this season, his career-best from three-land was 34 percent. Talk about leveling up!

Randle’s progress doesn’t end with his own scoring. Nope, he’s also become a facilitator with the basketball. Randle is averaging six assists per game as a power forward — almost double of his career-high.

He’s become an all-around threat for the Knicks, which earned him his first All-Star selection this year. You can’t help but feel Thibideau’s more spacious offense has given Randle the room to become a premier NBA star.

Red-Hot Going Into The Postseason

The NBA playoffs start on May 22. At this point of the pandemic-affected season, it feels like most teams are falling apart. Injuries from a condensed season have forced numerous star players onto the injury list.

Despite this, New York is presently thriving. No team has a longer win streak all year long than what the Knicks are currently on. What a better time to be peaking, huh?

While an inter-city postseason matchup with Brooklyn is on everyone’s mind (it could happen in round two), we’re instead thinking of the long-term. Given how newly put together both rosters are, we’re only just seeing the beginning of both’s ascent. This Empire State rivalry could be the talk of the NBA for the next several seasons.