How much salary cap space do Jets have after cutting Darrelle Revis?

The Jets had no other choice. With where Darrelle Revis is at this point in his career, they couldn't keep him on the roster with a $15.33 million cap hit. There was no doubt they were going to cut him. It was just a matter of when.  NFL Scouting... 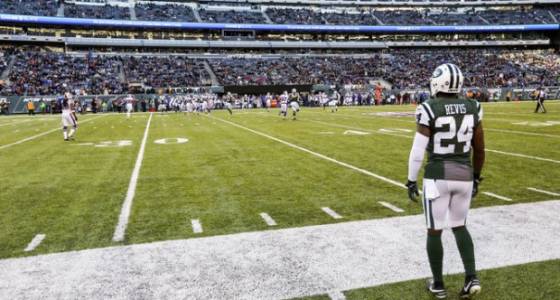 The Jets had no other choice. With where Darrelle Revis is at this point in his career, they couldn't keep him on the roster with a $15.33 million cap hit. There was no doubt they were going to cut him. It was just a matter of when.

NFL Scouting Combine: Who are the Jets watching?

Turns out, it was Tuesday night. The Jets released the future Hall of Fame cornerback, and arguably the best player in franchise history.

So ... what does it mean for the salary cap picture?

By cutting Revis the Jets freed $9.3 million in salary cap space, but he will still count $6 million in dead money on the overall cap picture. Incorporating Revis' release, the Jets are now an estimated $27.784 million  under the projected team salary cap of $168 million, per Overthecap.com.  The figure is the 20th-most in the NFL.

Please note: The team salary cap is not yet official. Exactly where the Jets stand isn't affirmatively known.

Here's a key point in the Revis contract, though: The Jets can actually get more money back. If Revis were to sign with a new team, his new salary would alleviate a portion of the dead money.

Say Revis gets a one-year, $4 million deal with the Eagles. Philadelphia would be on the books for the $4 million, and the Jets $2 million, giving the Jets an additional $4 million in salary cap space.  The Jets will not get any additional money for Revis' role in a street fight incident in Pittsburgh in early February. A league source told NJ Advance Media the team will not pursue any financial reimbursement.

Revis, who will turn 32 in July, was undoubtedly the NFL's best cornerback for nearly a decade. In his first nine seasons, he earned seven Pro Bowl honors. But, as is the case with every athlete, Father Time eventually caught up.

In 2016, Revis was a shell of his former self. He struggled mightily in coverage, intercepted just one pass, defended five, appeared to shy away from contact, and finished with the lowest PFF grade of his career (72.1).

The Jets drafted Revis in the first round in 2007. He spent the first six years of his career in Florham Park before ex-general manager John Idzik traded him to the Bucs. Revis played one year for Tampa Bay, signed with the Patriots in 2014, won a Super Bowl, then came back to the Jets in 2015, on a contract that paid him $39 million guaranteed, including $6 million in 2017.