PORT ST. LUCIE — Lucas Duda’s fragile back has motivated the Mets to formulate a contingency plan at first base for this season.With Duda sidelined after recently receiving a cortisone shot in both hips for what he said are back spasms, the Mets have... 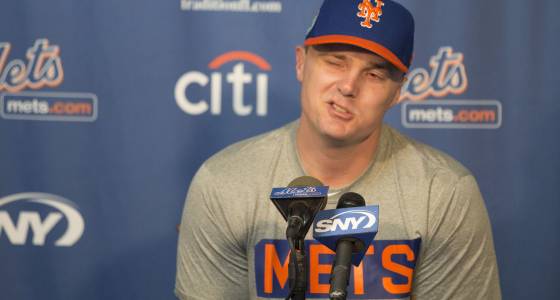 PORT ST. LUCIE — Lucas Duda’s fragile back has motivated the Mets to formulate a contingency plan at first base for this season.

With Duda sidelined after recently receiving a cortisone shot in both hips for what he said are back spasms, the Mets have begun working out Jay Bruce and Neil Walker at first base.

Bruce took grounders at first base Sunday, before the Mets beat the Tigers 5-2 in a Grapefruit League game at First Data Field. And Walker’s education at the position began a day earlier, when he participated in footwork drills with roving infield coach Tim Teufel.

At this point, manager Terry Collins considers Bruce a prime candidate for first base, if needed. Walker would likely fall behind Bruce on the depth chart.

“I liked everything I saw today,” Collins said, referring to Bruce’s workout at first base. “It looks like he’s got the athleticism, he’s got the hands, he’s got the arm angle. He made some throws in our drills that you wouldn’t expect an outfielder to be able to make, but yet he does. If that’s where we have to go, I think we’ll be fine.”

The 30-year-old Bruce, who appeared in three games at first base for the Reds in 2014, said he hasn’t played the position on a regular basis since his freshman year of high school.

Collins indicated there are no immediate plans to play Bruce at first base in an exhibition game, but it’s an option that could be explored later in spring training, depending on the situation.

Duda missed most of last season with a stress fracture in his back. After it became evident he would be sidelined for an extended period in 2016, the club signed veteran James Loney, who posted a lackluster .703 OPS in 100 games for the Mets.

Bruce shifting to first base if needed would allow Collins to potentially play Michael Conforto in what otherwise has become a crowded outfield situation.

Duda, who hasn’t worked out in four days, said his condition is not serious.

“I think it’s just a spasm of my back, so we’ll take a few days right now instead of taking two weeks down the road, and just be cautious,” Duda said.

Walker on Sunday played his first game since undergoing September back surgery, and finished 0-for-2 as the second baseman. The veteran infielder last played first base in the minor leagues.

“It’s more about kind of getting the footwork over there and getting a feeling of where you are on the field and if I need to get in game mode, either here or when the minor league games start up, I think that is probably the progression,” Walker said. “But I’ve done it in the past and it’s been awhile, so I just need to go through the early steps.”

For now, Collins is more focused on Bruce as the backup plan for Duda.