CLEARWATER, Fla. — Gleyber Torres is listed among the top prospects in baseball for a solid bat and good actions at shortstop.Saturday he displayed very good instincts when he scored from second on a wild pitch against the Phillies at Spectrum Field.Torres,... 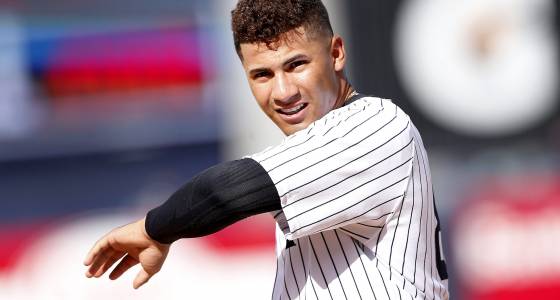 CLEARWATER, Fla. — Gleyber Torres is listed among the top prospects in baseball for a solid bat and good actions at shortstop.

Saturday he displayed very good instincts when he scored from second on a wild pitch against the Phillies at Spectrum Field.

Torres, who had two doubles in a 6-5 loss, was on second base behind Miguel Andujar when Cesar Ramos bounced a pitch in the dirt that hit catcher Cameron Rupp and rolled toward the Yankees’ dugout. After Andujar scored easily, Torres raced around third and was safe at home.

“I was ready for anything and when the pitched bounced I was ready to run,’’ said the 20-year-old whose speed is considered average.

Acquired from the Cubs as the linchpin of the deal that sent Aroldis Chapman to Chicago last July, Torres is ticketed for Trenton (Double-A) this coming season which will be his first above Single-A.

“It’s great instincts and aggressive baserunning. There are a lot of things he has to do. He has to get a good secondary (lead), a good jump on the secondary and then read the ball and he did all three,’’ Joe Girardi said. “He is a bright kid who knows how to play the game. You look at his at-bats, a double down the right-field line, a double down the left-field line, using the whole field. He played a very good shortstop today. His IQ is really good.’’

Asked if Torres reminded him of a young Jeter, Girardi said, “They are probably different kind of players. As far as being able to play in the moment? Yes. They are different type of players.’’

Chase Headley spent Saturday morning field ground balls and tossing them to the side instead of throwing them to first — an unnerving site reminiscent of how the Mets David Wright has spent his spring.

“My arm is a little tired,” said Headley, who insisted all was well.

Unlike his crosstown counterpart, whose rehab from last June’s neck fusion surgery has limited his throwing, Headley added his shoulder is fine and he expects to start at third in Sunday’s game against the Blue Jays.

“Just a little fatigue in the body,” Headley said after his workout at Steinbrenner Field in Tampa. “I’m big on trying to get quality work when I’m doing it. I don’t want to go through the motions. I’m not a guy that lobs the ball over to first. I think I’ve got to game-like so when I do that, instead of throwing it 50 percent, I think it’s a better alternative to just take a day here and there.”

He said he throws more than most early on and takes a handful of days off over the course of spring training. Still, it was odd seeing him alongside Ruben Tejada while Tejada threw and Headley did not.

Headley’s health has been an issue at times in his career, but he insisted this wasn’t a sign of an impending problem.

“I certainly could have thrown, but what’s the point? It’s February 25,” Headley said. “There’s nothing going on.’’

Playing center field, infielder Tyler Wade believed the Phillies’ Maikel Franco’s ground ball to the warning track had rolled under the fence. Wade put his hands in the air to signal the umpire that the ball was out of play. Nevertheless, it was ruled the ball never left the field and Franco was credited with an inside-the-park home run.

Jonathan Holder pitched in Single-A, Double-A, Triple-A and the big leagues last season and has a chance to be a Yankees reliever at some point this year. He pitched an inning Saturday and fanned two of the three batters he faced.