How does Mets' Terry Collins feel about Tim Tebow?

PORT ST. LUCIE, Fla. -- A few weeks ago, I asked ESPN analyst Keith Law what Tim Tebow's next step should be. He drew a long pause, cleared his throat, and delivered one succinct answer: Quit baseball.  Sunday afternoon, when Mets manager... 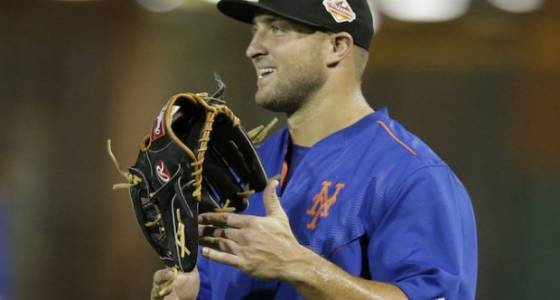 PORT ST. LUCIE, Fla. -- A few weeks ago, I asked ESPN analyst Keith Law what Tim Tebow's next step should be. He drew a long pause, cleared his throat, and delivered one succinct answer: Quit baseball.

Sunday afternoon, when Mets manager Terry Collins was asked about the former Heisman Trophy-winning quarterback, he cleared his throat, drew a long pause, and delivered a succinct answer: "I got enough on my plate at the moment with what I got here," Collins said.

Could Conforto force Bruce to first base?

But like it or not, Tebow is playing baseball this spring for the Mets. He reports to minor league camp on Monday, ahead of his official report date, and will hold a press conference and a workout.

Collins thinks he saw all he needed to see of Tebow in the Arizona Fall League, where he hit .194 with 20 strikeouts last year. But he knows that ultimately, baseball is for the fans and Tebow is a player the fans want to see. So like it or not, Tebow will be in big league camp at some point over the next month.

"This game is about our fans. It will always be about the fans," Collins said. "And this guy is a special person. A tremendous athlete, he's got a huge name in the sports world and he's in our organization trying to be a baseball player. I'm certainly not going to take anything away from that. I salute him for what he's trying to do."

But can he do it? It's unlikely that Tebow will ever reach the major leagues, at least not with the Mets, who are so loaded in the outfield they may have Jay Bruce play some games at first base to clear a path for Michael Conforto.

"It's not going to be easy. It's going to be very difficult," Collins said. "But he's a tremendous competitor. I know he's a winner. That's [going to] mean a lot in that big clubhouse full of young kids over there."

So, if nothing else, Tebow will be an organizational role model for the minor leaguers. Which is better than a sideshow for the major leaguers.

Collins is confident that his clubhouse, which is already full of proven big league leaders, won't let that happen. He doesn't need any long pauses to think that one over.

"Those guys, when he walks in our clubhouse, they'll let him have it. They're not afraid," Collins said. "Of course, he's a little bigger than they are. But it's a tremendous clubhouse and I know they'll reach out and try to make him feel at home."