PISCATAWAY -- Izaiah Brown made history in the Big Ten track and field championships on Saturday, posting a conference-record time (45.32) in the 400-meter event. But the biggest race of the Rutgers sophomore's life was measured in lives saved... 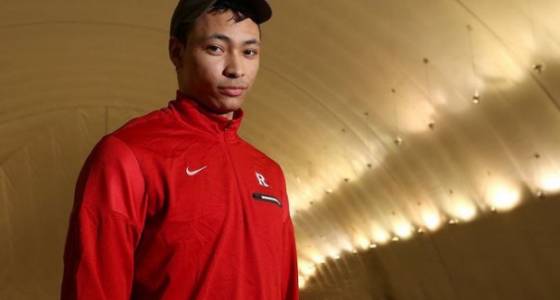 PISCATAWAY -- Izaiah Brown made history in the Big Ten track and field championships on Saturday, posting a conference-record time (45.32) in the 400-meter event.

But the biggest race of the Rutgers sophomore's life was measured in lives saved -- not seconds on a stopwatch.

Days before he was set to begin his sophomore year at Rutgers, the Amsterdam, N.Y., native experienced tragedy. His two-family home in the Albany suburb was destroyed by a fire.

According to authorities on the scene, Brown's actions saved lives.

"I believe in total, upstairs and downstairs, there were eight people,'' Officer Allen Drake of the Amsterdam Police Department told the Daily Gazette (N.Y.) in an August 30, 2016, report.

"Everybody got out fine.''

That's because Brown sprinted into action shortly after he returned home from an afternoon track practice. He barely had time to swallow a spoonful of cereal before he smelled smoke.

"First thing we thought was (the man living) downstairs was burning food,'' Brown said, recalling the traumatic moments in an extensive interview with NJ Advance Media last week. "My friend, who had just returned from football practice, and I saw black smoke and instantly knew it was a fire. So we woke everyone up and got out of the house. My mom and my sister were asleep. I ran downstairs and got the two little kids out, and made sure the man of the house was out of the house.''

He actually made three trips in and out of the home in all -- the second was to alert the family downstairs of the fire and the third was to retrieve his phone, he said, in order to call the fire department.

"It was just pitch black,'' he said. "The only reason I saw my phone is because my phone case is glow in the dark. My wallet was next to it and couldn't see my wallet. I was literally crying. It was dense pitch black smoke, and I was choking.''

That he did it all without shoes on adds another layer of improbability for a track star with Olympic-level aspirations.

"It turned out to be an electrical fire and the man downstairs hit it with (water from) a hose, which kind of made it worse,'' Brown said. "When the fire fighters got there, the house was engulfed (in flames) and they had me help them run the hose down the hose down the street. I was trying to do everything I could to try to stop it and save the house. It was so bad by the time they got there it just burned out. Everything was destroyed; the whole house leveled.''

His mother, Crystal Albino, was napping after working a shift for a local home health-care service company. After being awakened, she made sure her 15-year old daughter, NyAsia, was safe, grabbed their Maltese poodle and escaped with Brown leading the way.

"I was in total shock in disbelief and dismay,'' she said in a phone interview. "It was one of the biggest fears I've had -- other than losing my children --  a fire destroying my home. Izaiah just happened to get home 5 minutes before it started. He woke me up and said, 'Oh crap, mom, I think there's a fire.' Five minutes later the house was almost consumed.''

"I try not to look at it,'' said Albino, who moved with her daughter to a home across the street. "It's on the opposite side of the street toward the corner so I avoid that area.''

Still, there are reminders that are impossible to ignore. In the basement of her new residents are the trophies won by Brown, a high school All-American who captured 20 New York sectional titles and five state championships during his decorated scholastic career.

"It's a constant reminder of all his great accomplishments but it's also a reminder of that tragic day when everything happened,'' she said. "They're pretty charred.''

Although Brown said officials from New York's high school athletics governing body offered to replace the trophies and medals, he declined their gesture.

"I honestly look at those trophies as just another obstacle we had to overcome,'' he said. "And that's exactly what we did. We have a better place now. We have almost everything we had, and better, and I'm now out here again doing what I love to do.''

For a Rutgers track and field team that hasn't had an Olympian since Balazs Koranyi represented Hungary in the 1996 and 2000 games, Brown has a chance to go down as one of the program's all-time greats.

"It's early and I never want to put that kind of pressure on a young man, but I would tell you (the Olympics) are not an impossibility,'' said Lou Tomlinson, an assistant Rutgers track coach who has been training the team's sprint-event runners for 16 years. "His potential is off the chart. it's now a matter of whether he wants to go for it. As far as talent and potential, it's there. The sky is the limit.''

The Rutgers coaching staff, led by Mike Mulqueen, Tomlinson and assistant Robert Farrell, won one of their biggest recruiting battles in recent program history when they landed Brown's commitment in November 2014. Brown, who captured the 2015 New York Public High School Athletic Association crown in the 400m with a state-record time of 46.40, chose Rutgers over Florida, Michigan, Penn State, UCLA and USC.

Prior to a recent practice inside the team's Bubble, Brown said Rutgers' "family-like'' atmosphere and the bond he felt with his now-teammates were "big selling points'' in the decision. Tomlinson agreed, but said he believes it went deeper than that.

"He has a mom and sister, and he's the big brother so he felt he wanted to stay close,'' Tomlinson said. "In my opinion, that's how we won it.''

From an early age, Albino said her son, now 19, had to be "the man of the house.'' Shortly before his fifth birthday, Brown lost his father, who died as a result of a car accident, according to Albino.

"He had to assume that role at a young age,'' she said. "To be honest, I still get emotional about it. His strength, his ambition and his drive, I've always admired that about Izaiah. He's always been ambitious and a go-getter ever since he was little. He's always aimed for his goals and he's always managed to somehow accomplish them.''

In the wake of the fire, Brown was a rock, showing little emotion as he ensured the safety of his family.

"As the man of the house,'' Brown said, "what good would it have done for my mom and sister to see me crying?"

An admitted "pack rat,'' Brown considers himself lucky. Still, the photos of a dad whom he hardly knew are impossible to replace.

"Those pictures, unfortunately, are erased,'' he said. "Those were special because I didn't know my dad long enough to know what his life was like.''

Scrolling through the same phone he manged to retrieve from the fire -- "The phone case,'' he says, "glows in the dark'' -- Brown stops at an image of a newspaper article with a photo of his father and his uncle.

"I still have a picture of him,'' he said, smiling.

His uncle, Edward Brown, is the reason why he stopped playing basketball and football to focus on track and field in 8th grade.

"I joined track and field to break my uncle's high school record in the high jump. That was my original intention to join track,'' the Rutgers quarter-miler said. "But then they saw I had running ability in the 400 so I got sucked into that.''

Brown expressed disappointment when asked if he broke his uncle's high jump mark.

Oh, he's accomplished plenty of records since specializing in the 400-meter race.

At the Big Ten indoor championships last Saturday in Geneva, Ohio, Brown captured gold by stopping the watch at 45.32 in the 400. The time is currently the nation's second best in the event heading into the NCAA Championships next month.

"Absolutely,'' Tomlinson said, when asked if Brown's the best sprinter he's coached in his nearly two decades at Rutgers. "But he's still learning the sport and in terms of his body maturing, he's still a young man. The weight room will take effect as he continues to mature, and experience helps. For those reasons I believe there's quite a bit of potential there.''

Brown dismissed a question of whether he believes the 2020 Olympics could be in the cards.

"I'm still a work in progress, still trying to reach the best potential I can and I'm constantly improving,'' he said. "I know there's always bigger and better out there than me. So I have to work my way to be the biggest and the best I can.''

The fire, he said, remains a motivating factor in his training.

"I definitely take it as a lesson, and try to take advantage of everything I have,'' Brown said. "I literally walked into my house and noticed the smoke; what would've happened if I wasn't there? My mom and my sister were asleep; I could've lost people dear to me. Losing my father at a young age, that was also a life-altering moment. It definitely opened my eyes to how cruel the world can be in seconds. And the fire, it literally took an hour for everything I own in my life to burn down.''

One of the most accomplished, national-level athletes on the Rutgers campus doesn't consider himself to be a hero. "Not at all,'' Brown said. "I just did what anyone else would do in that situation.''

His mom, not surprisingly, disagrees.

"He's my hero, he's my inspiration, he's everything,'' Albino said. "I never dreamed he would make it so big. The pride that I feel pours out my heart for him. It's just a great feeling to have such an incredible son.''