The scramble began Tuesday morning in Lakerland for confirmation and clarification — Jeanie Buss dropped the news in a press release that Magic Johnson was her choice as the team’s new president of business operations, stripping brother Jim... 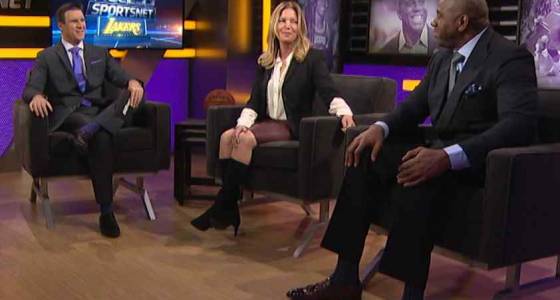 The scramble began Tuesday morning in Lakerland for confirmation and clarification — Jeanie Buss dropped the news in a press release that Magic Johnson was her choice as the team’s new president of business operations, stripping brother Jim Buss of that duty, and firing general manager Mitch Kupchak in the process.

“I had no idea this news was happening — the team kept it closely guarded,” said Bresnahan. “I didn’t feel as if I got special treatment (in doing the interview).

“That day to me felt pretty natural talking to them as I often do. I felt we needed to ask questions that were on the minds of the fans and get honest, authentic responses. There’s a service we provide to the viewers to get questions asked that are important. If those questions aren’t asked, that’s on me.”

Hired away last summer from the Los Angeles Times, where he spent 12 of the last 22 years as the Lakers’ beat writer, Bresnahan has quickly navigated this TV role and all its requirements — mining information, offering opinions based on his contacts and observations, and, in cases like this, becoming a valuable point man on breaking news.

Make sure his hair is combed and facts are right, and put him in front of the camera.

The purpose Tuesday wasn’t for SSN to tie the ribbon on the Lakers’ narrative and package it nicely for the viewing audience. As Lakers beat reporters for print, TV and online wrestled with their own deadlines realities to gather news and opinions about what just happened, the SSN crew was given first shot at this.

Whether perceived fair or not, it’s based primarily on their $3 billion, 20-year TV rights business deal.

Perhaps Bresnahan could get by with lobbing a few softball questions here, but that isn’t his way of doing things. If anything, this half-hour show gained more credibility by his asking Buss and Johnson what happened and why it did.

That’s why SSN hired him in the first place.

Four years into this Lakers TV deal (which started before Charter Communications bought Time Warner Cable), and the Lakers struggling through another season to produce victories and satisfy a fan base, Ponsiglione said he felt a need to revamp some coverage elements.

The most visible was to hire Bresnahan, based on his wealth of experience and connections as well as his performance on many off-day Lakers studio shows. He would replace studio analyst Dave Miller.

It’s not anything new any longer for longtime media print reporters “go to the dark side” of TV work, as various pros and cons factor into these career decisions. Are they “selling out”? Will the beat reporters he still has to work with resent him? Is the competition correct in assuming he likely gets scoops spoon-fed to him?

Bresnahan’s reputation never brought that into this equation with his colleagues.

A University of Wisconsin journalism grad who grew up in the San Fernando Valley and went to The Buckley School in Sherman Oaks, the 45-year-old Bresnahan covered high school and college sports, the Kings and pro beach volleyball before landing with the Lakers through their Kobe Bryant run.

Inside the ‘insider’ role

Ponsiglione said based on how other Comcast regional sports networks that had NBA team partners were employing a specialized reporter to bolster information flow, SSN was “never at the forefront before in news gathering, yet Lakers news drives everyone wild.

“The ‘insider’ role best describes what he does — he has the pulse of the team on what’s going on based on the reporting and relationships he’s built. We were all familiar with him, knew he had the chops on air and in our minds, he was the clear leader — and he was already getting inquiries from NBA TV.”

Bresnahan’s decision to make “an adventurous mid-career switch” wasn’t really anything drastic in what was trying to get accomplished, just now a different execution. Instead of tracking and reporting stories behind the scenes, there’s a camera now, often live.

He says he doesn’t feel he gets any more or better access to players with his affiliation. His independent work, for that matter, on knowing that Jeanie Buss was about to ask Johnson to come on as an advisor became “a rewarding day for me and the network” when it was eventually announced. Bresnahan also recently was first to report on guard D’Angelo Russell’s knee issues that sidelined him for some time.

Should he ever come across a story laced in some sort of scandal — say two players get into an off-the-court incident — Bresnahan’s protocol is always the same: Contact his boss Ponsiglione, let it be discussed internally, then decide how to release it.

“As a partner with the Lakers, we will have some inevitable advantages,” said Ponsiglione. “But the goal of the network is to be the place Lakers fans go to for all Lakers news, and, as was case Tuesday, even when something major happens.

“I also think by this point, there is no doubt viewers know Mike works for Spectrum Sports, not for the Lakers.”

In April of 2014, Bresnahan wrote the Times’ story that produced Jim Buss’ proclamation that he would step down from basketball opps if the team couldn’t turn its fortunes around in a three-to-four year window.

Flash forward to Tuesday, and Bresnahan had to chance to directly ask Jeanie Buss the follow-up: Based on Jim’s statement back then, had time run out on her brother? She admitted it had.

“I still feel like I’m a guy asking questions, not just the easy ones, but what people want to know, which is how I’ve always done it,” said Bresnahan. “I think the only thing that maybe has changed is now I’m expected to jump into interview sessions sooner, get the responses so they can be edited and turned around for the broadcast.”

Bresnahan said he sticks by a rule that now-retired Times sports editor and columnist Bill Dwyer once told him: As a journalist, be accurate, insightful and entertaining.

“Now I’m finding there are ways to do that not just in print but also on TV,” he said.

• FS1 finally decided this week to cancel what was left of “Fox Sports Live” and pass on renewing the contracts of hosts Jay Onrait and Dan O’Toole. It doesn’t seem all that long ago — the fall of 2013 — when FS1 launched with all this to-do about the two Canadian imported hosts and what their should would bring to sports news and entertainment. According to the story posted Thursday on the Sports Business Daily, FS1 will also not renew “Garbage Time” with Katie Nolan, but she is expected to stick around in some capacity.

• If it’s not a chilling effect that comes from watching President Trump deal these days with the media, then it’s just an odd coincidence that new Oregon head football coach Willie Taggart declared this week he would no longer acknowledge The Oregonian beat reporter Andrew Greif. Last month, Greif broke the news about three Ducks players hospitalized after what he called “grueling” offseason workouts with a strength coach. Taggart told The Daily Emerald of Eugene, Ore., of Greif’s reporting: “When you’re not fair and honest, then to me that’s personal. When you do something that’s negative and it’s going to be personal, then I won’t have (bleep) to do with you.” Taggart told The Daily Emerald that he specifically told Greif the workouts were not “grueling” or “military-style.” Greif denies that and said if Taggart had told him that, then he would have reported it. An internal Oregon investigation ruled Grief’s story to be ultimately fair in what he reported. Good grief, Taggart. Bad more, Ducks.