Grunts, scowls and muttered profanities typically greet a major league manager when he comes out of the dugout to pull his starter in the middle of an inning.But Houston Astros manager A.J. Hinch noticed something different from his pitchers around the midway... 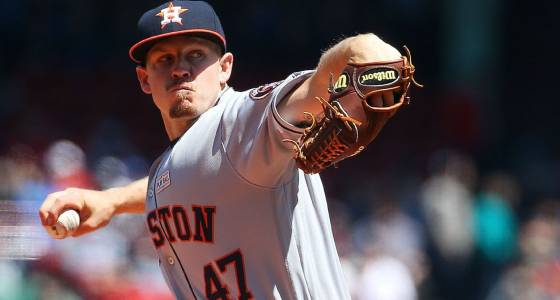 Grunts, scowls and muttered profanities typically greet a major league manager when he comes out of the dugout to pull his starter in the middle of an inning.

But Houston Astros manager A.J. Hinch noticed something different from his pitchers around the midway point last season. Once they realized who was coming in to replace them, they weren't as upset.

The attitude, as Hinch described it, was: "Devo is coming in to save the day."

"Devo" is 26-year-old righty Chris Devenski, who enters this season with high expectations after being one of baseball's biggest surprises as a rookie in 2016, when he posted a 2.16 ERA in 108 1/3 innings pitched.

Devenski is in an interesting position this spring. He could be a member of the Astros' rotation. Or he could be used in a variety of roles out of the bullpen.

There is great temptation in either option. As a starter, Devenski pitched a 16-strikeout no-hitter in Class A and took a perfect game into the sixth inning of the Triple-A championship game. If you don't count one bad outing against the Boston Red Sox, in four other starts he had a 1.99 ERA with 20 strikeouts in 22 2/3 innings.

The Astros could have a deep rotation if Dallas Keuchel returns to Cy Young form, Lance McCullers stays healthy and Collin McHugh finds the consistency that made him a standout a few seasons ago. Devenski could be the fourth or fifth starter, giving the team the depth it needs to contend for a pennant.

As a reliever, Devenski apprenticed in a mop-up role (the Astros lost each of his first nine relief appearances) and then moved his way into bigger situations. He struck out seven Toronto Blue Jays in a row from innings 10-12 during a perfect 4 1/3 innings stint on Aug. 1, and went 1-2-3 through NL MVP Kris Bryant, Anthony Rizzo and Jorge Soler the first time he faced the Chicago Cubs in a Sept. 10 appearance.

He ranked third among relievers in innings pitched with 83 2/3 and had the fifth-lowest ERA (1.61) and third-lowest WHIP (0.81) among those who pitched at least 50 innings out of the bullpen.

The Astros have the potential to have one of baseball's best bullpens. Ken Giles, Luke Gregerson and Will Harris are all capable of being a closer or setup man. Devenski could slot in right alongside them.

Devenski has said he prefers to start, but asked whether he considers himself a starter or reliever, his response was: "I'm both."

"What's got him to this point is his mindset and his attitude," said Minnesota Twins catcher Jason Castro, a former Astros teammate. "He always wants the ball. It doesn't matter what the situation is. He's got that bulldog mentality out there. That's good to see from a young guy. Usually you get some mixed things, but he's a competitor."

If you were going to put a statistical grade on his makeup, it would be high on the 20-80 scouting scale, according to one talent evaluator.

"He's a blue-collar warrior," one scout said. "He's a guy I root for because he always has to prove himself. We undervalue these guys because we don't value this type of makeup enough."

At 6-foot-3 and 210 pounds, Devenski has also separated himself with his fitness, allowing him to pitch long or short stints.

"He's as physically fit in baseball and in training as any pitcher I've been around," Hinch said. "He's a different breed of athlete."

Devenski's potential went overlooked when he was a prospect. It wasn't until the 25th round of the 2011 MLB draft that the Chicago White Sox took a chance on the product of Cal State Fullerton and Golden West Junior College.

But just over a year later, the Astros selected him as the player to be named in the deal that sent pitcher Brett Myers to the White Sox. Why did the Astros seemingly go out of their way to add a 25th-round pick whose fastball topped out in the mid-90s and who had 70 innings worth of Class A ball as a professional sample size?

"Analytics and the spin rate on his curveball," said one major league source familiar with the Astros' line of thinking.

Devenski worked through the minor leagues slowly but took off in 2015, when he allowed only four runs over 55 innings in the first 11 appearances of his second year with Double-A Corpus Christi. One year later, he was turning heads in an exhibition game against the San Diego Padres in Mexico City, striking out seven in 4 1/3 innings. That left Hinch and others to wonder whether he should make the team.

Devenski didn't, but as fate would have it, the Astros needed a pitcher a couple of days into the 2016 season when a short start necessitated heavy bullpen usage. Devenski got the call-up from Triple-A.

The turning point of his season came after a bad start on May 15 against the Boston Red Sox in which he allowed as many runs as he recorded outs (six) and lamented his poor performance after the game.

Devenski was subsequently moved back to the bullpen. On May 25, having pitched once since the dud at Fenway, he sent this tweet:

Sometimes you have to write a new chapter

Two days later, Devenski was in California, pitching 4 1/3 scoreless innings of relief against the Los Angeles Angels in the ballpark his family used to drive past regularly near their home in Santa Ana, California. In the 21 innings after that game, he allowed three runs. The new chapter had begun.

The curveball helped him get to Houston, but the changeup and slider were the biggest keys to his success. Scouts consider the changeup his best pitch.

By FanGraphs' pitch-success value metrics, the overall value he got from the changeup ranked the fourth-highest of any pitcher, trailing full-time starters Kyle Hendricks, David Price and Marco Estrada.

"When he throws the changeup, it paralyzes guys," said Bert Villarreal, his baseball coach at Golden West.

Castro, who spent his first six major league seasons in Houston, said Devenski's changeup has "kind of a different action -- it's got a ton of movement and a lot of depth to it. The way his delivery is, he almost jumps at the hitter a little bit. It's a little deceiving and tough to pick up. He does a good job of disguising it. He's got so much movement, and the speed differential [about 11 mph slower than his fastball], that just makes it a really tough combination."

Devenski began using a tight, harder-thrown slider in earnest when he made a spot start Aug. 11 against the Twins. When he went back to the bullpen after that game, he took the pitch with him.

"I'm trying to master that pitch," Devenski said. "I know I can."

Statistically speaking, there was plenty of mastery last season. From Aug. 27 to the end of the season -- which approximately coincided with his transition into high-leverage, Andrew Miller-like usage -- Devenski had a 1.31 ERA with 27 strikeouts and one walk in 20 2/3 innings, allowing one extra-base hit.

The chart shows how effective Chris Devenski's slider was from Aug. 27 to the end of the season, compared to what it was like earlier.

Devenski's pitch combination gave big sluggers a lot of trouble. He allowed four home runs in 108 1/3 innings (none in 57 2/3 innings at Minute Maid Park). Cleanup hitters hit .125 (6-for-48) with 13 strikeouts against him. The three American League 40-homer hitters he faced last season -- Nelson Cruz, Khris Davis and Todd Frazier -- were a combined 0-for-15 against Devenski.

"He has the weapons to answer every swing path," Hinch said. "He can go north-south or east-west with his pitches. He feasts on big swings with his changeup."

On to another chapter

It's one thing to do what Devenski did last season. It's another to do it, or something close to it, again. The three primary public statistical projection systems (ZiPS, PECOTA and Steamer) project him for ERAs of 3.29, 3.59 and 3.90, respectively, largely because they don't think he can maintain his home run rate.

"It's a lot to ask a hitter to hit .330 two years in a row or a pitcher to dominate every facet of pitching," Hinch said. "But I'm not going to doubt him until the league adjusts."

Devenski's outlook can be summed up this way: Each day starts a new chapter.

"I'm just going to try to be better than I was yesterday," Devenski said. "Ultimately, at the end of the year, I want to hold up a World Series championship trophy and put a ring on [my finger]. It's a long process. You've just got to keep rolling with it. Every pitch and every play [in big games] is going to mean something. I'm ready to do it."

Sounds like a guy ready to save a few days.