Bohemians 1905 hosted Slovacko in the Czech First League on Sunday, and in playing terms, the match was a relatively drab affair between two mid-table sides. It ended 0-0, but the biggest story of the match wasn’t a passage of play, it was a heroic life-saving... 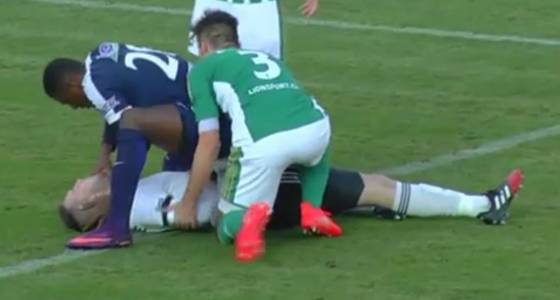 Bohemians 1905 hosted Slovacko in the Czech First League on Sunday, and in playing terms, the match was a relatively drab affair between two mid-table sides. It ended 0-0, but the biggest story of the match wasn’t a passage of play, it was a heroic life-saving act in the first half.

Goalkeeper Martin Berkovec collided with his own defender Daniel Krch, with both men immediately going down injured. Berkovec in particular looked to be in trouble, and the referee and his teammates frantically signaled for medical attention immediately.

Slovacko striker Francis Kone took direct action though, leaning over the goalkeeper and pulling the unconscious player’s tongue out of his mouth to keep him from swallowing it. The intervention saved Berkovec’s life.

And the craziest part? According to the hero himself, this isn’t the first time Kone’s saved a life on the pitch.

“It has been four times,” Kone said. “Once in Thailand and twice in Africa. I’m always checking the players, to make sure they have not swallowed their tongue.”

Following Kone’s successful intervention, Berkovec underwent a CT scan at the hospital and spent the night under observation. He is expected to make a full recovery.

Kone has been roundly praised in the Czech Republic for his action, and the man whose life he saved took to Facebook to express his gratitude.

“I would like to thank Francis Kone for rescue and emergency at today’s game,” the goalkeeper said. “I’m glad for the relief and thanks again!!!”