Galleries Videos CONTACT ADVERTISE
Girne 0°
BUSINESS EDUCATION ENTERTAINMENT HEALTH POLITICS SCIENCE SPORTS TECHNOLOGY
08:11 Stick it to “The Man” at the Zero Trust Security Summit
04:37 What to Consider When Starting Your Own Business
10:17 Clover POS System for Dental Offices
06:14 How Mobile Technology is Revolutionizing the World of Poker
20:31 The Importance of Banks in Our Lives
05:46 Things to Consider When Hiring a Criminal Defense Lawyer
09:15 Couple T-shirts are ideal for spicing up relationships
09:01 Laser Tattoo Removal and Its Amazing Benefits
07:58 Consolidate your medical bills with a debt consolidation
19:48 Is your mind a certain people? Elina Tanskanen gives a task, which you...
BIST
119802
GOLD
298.874
USD
5.9395
GPB
7.7365
EUR
6.5365
Breaking News
Why Go for Physical Therapy and How to Find the Best Therapist
Close 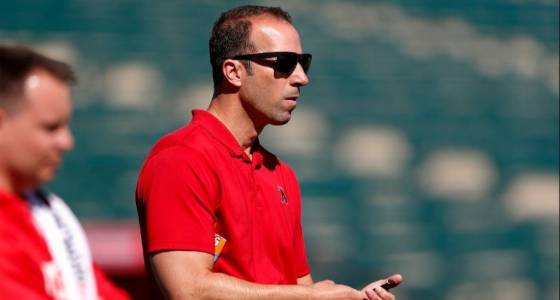 “Let’s call it what it is,” Eppler said. “If we can get 25 or more starts out of every guy that we go west with, the original five, I think we’ll be in pretty good shape.”

That, of course, is unpredictable. Asked then if it wasn’t more likely his team would not get 25 or more starts out of its top five choices, Eppler nodded.

“In general, that’s the case,” he said. “Then, you hope the sixth guy or the seventh guy are as good or close to as good and provide the same thing. That’s where depth comes in.”

The Angels thought they had sufficient depth a year ago, when they began camp with eight established starters. The problem was one of those men, C.J. Wilson, never actually pitched, and three more tore their ulnar collateral ligaments — two within the season’s first month.

And so they lost 88 games and doled out starts to the likes of Tim Lincecum, Jhoulys Chacin, David Huff and Brett Oberholtzer, all of whom were acquired after the season’s start.

This year, there are far more starters ostensibly competing for a spot, but only five who have ever made 25 or more major league starts in a season. Yet, the club continues to say it’s satisfied with its depth.

Manager Mike Scioscia went so far as to indicate Thursday that starting pitching will be a strength of his 2017 team.

“We’re confident we have the depth that is going to give us a championship-caliber rotation,” Scioscia said then. “Exactly what the names are gonna be or what order remains to be seen, but we’re excited with the depth that we have. We’re excited with our defensive team, which should be an excellent team, and the positive effect that’ll have on all of our pitching, especially on our starters. We’re confident.”

Rival talent evaluators agree that the Angels will boast one of the best-defending rosters in the major leagues, with above-average starters at catcher, shortstop, second base, and across the outfield. But they differ in their opinions on the quality of the Angels’ assembled pitching depth.

Some members of the club’s contingent — mostly right-hander Alex Meyer and left-handers John Lamb and Nate Smith — have fans among outside talent evaluators. But those evaluators know they are in the minority. And, in tandem with an uncertain starting five, none call the Angels’ rotation a strength.

Four of those men have never started a major league game. The remaining six last season combined to log 226 2/3 innings as starters, with a 5.72 ERA.

Among all MLB starting pitchers last season, the average ERA was 4.34.

Albert Pujols, recovering from December surgery, has begun light defensive work at first base. “It’s baby steps, but it’s a start,” Scioscia said. Fellow first baseman Dustin Ackley is not yet cleared to throw after June shoulder surgery, but he is taking ground balls. …Right-hander Cam Bedrosian is still sidelined from a groin strain suffered Tuesday. …This spring, the Angels will welcome nine guest instructors, most of them former Angels. Chuck Finley, Bobby Grich, Scot Shields and Shigetoshi Hasegawa have already visited, and Jim Abbott, David Eckstein, Wally Joyner, Jon Wilhite, and Clyde Wright will later in the spring. …Angels minor league pitchers and catchers must report to their camp by Saturday. Exhibition games begin 12 days later, on March 16.