CaptionClosePULLMAN, Wash. (AP) — Given Washington was absent its star Markelle Fultz, the Pac-12 leading scorer, Sunday figured as good an opportunity as any for Washington State to secure its first regular season sweep of the Huskies since the 2010-11... 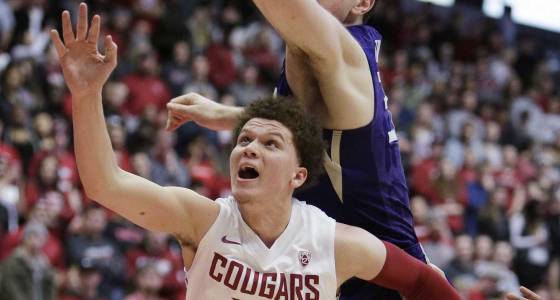 PULLMAN, Wash. (AP) — Given Washington was absent its star Markelle Fultz, the Pac-12 leading scorer, Sunday figured as good an opportunity as any for Washington State to secure its first regular season sweep of the Huskies since the 2010-11 season.

The four Cougars honored for senior night made sure it happened. They accounted for 85 percent of the team's points.

Josh Hawkinson finished with 22 points and seven boards and provided key baskets down the stretch to power Washington State past in-state foe Washington 79-71 on Sunday.

The win marks the Cougars' first season sweep of the Huskies since 2010-11, and extends the Huskies losing streak to a school-record 10 games. In Fultz, UW was missing 48.2 percent of its scoring.

"It was kind of frustrating for a little bit there because we'd get a stop then they'd get an offensive rebound and an easy two points so we kind of keyed in on that and continued to get stops," Hawkinson said. "Once we got all five guys to start to rebound, that started to be the difference."

Malik Dime cut the deficit to three with 1:06 left, but Malachi Flynn sealed the win with a 3-pointer on the other end.

"That boy (Flynn) is clutch, man," Iroegbu said of the Federal Way, Wash. native. "I guess there's something about Seattle guys and the Huskies, man. When they come to WSU they've got a chip on their shoulder and this one proved himself."

The Huskies opened the game with five turnovers on each of their first five possessions, and coughed up 10 in the first half. But eight early points from Dickerson and poor shooting by Washington State helped tie the game at half.

Washington took a six-point lead early in the second half after starting 7 of 11 from the field. The Cougars charged back and brought the game within one point multiple times. The Huskies kept them at bay, until Robert Franks grabbed an offensive board and scored with 7:58 to play to put WSU up by one. Once the Cougars took the lead with four minutes left, it did not lose it.

"We didn't do a good job of two things in the second half," Washington coach Lorenzo Romar said. "We didn't keep them out of the paint and our shot selection at times was questionable. That's just not a good combination."

There were eight lead changes.

Washington State won the first matchup of the season 79-74 in Seattle. The road team had won 3 of the last 4 meetings going into Sunday, with the last matchup in Pullman going the Huskies' way in overtime.

Washington: The Huskies chances against in-state rival Washington State took a hit when it was announced star guard Markelle Fultz was out with a knee injury. UW, which entered the game at 11th place in the Pac-12, extends its losing streak to 10 games.

Washington State: Eight days after snapping a five-game skid, the Cougars gathered its second consecutive series sweep against a conference opponent since 2011-12. . The Cougars honored seniors Hawkinson, Iroegbu, Callison and Conor Clifford in the pregame. ... They entered the game in 10th place in the Pac-12.

Washington guard Markelle Fultz missed his third game with a knee injury on Saturday and his status is unknown going forward, Romar said. Fultz, a popular projection as the top pick in the upcoming NBA Draft and the Pac-12 scoring leader, missed UW's games at Colorado and Utah two weeks ago with the same injury. He returned last week against Arizona State and Arizona, and posted 19 and 26 point outings, respectively.

"We knew that there was a chance he could still be sore after he played (last week)," Romar said. "It hasn't responded the way everyone we would have liked for it to respond."

Washington State coach Ernie Kent sounded off in support of the student section, which he said helped the Cougars turn momentum into a comeback late.

"One day that Pac-12 championship will come through Pullman and the key is the students," Kent said. "That arena was no different than Colorado, Arizona, Oregon, UW, Utah in the last seven minutes. . When that energy rises up we're able to go on that run."

The 5,003 attendance was the highest of the season at Beasley Coliseum.

Washington: The Huskies head to Los Angeles to face No. 5 UCLA Wednesday and Southern California Saturday before heading to the Pac-12 tournament in Las Vegas.

Washington State: The Cougars end the regular season with the same trip to play USC Wednesday and No. 5 UCLA on Saturday.