Finally, Frank Kaminsky is showing us what all the fuss was about.With his 24 points and 12 rebounds in a Tuesday night victory over the L.A. Lakers, Kaminsky continued what has been the best streak of his young NBA career. He is averaging 19.9 points and... 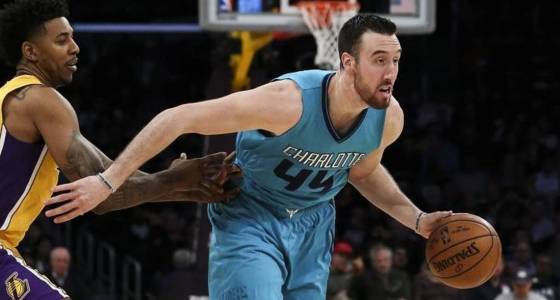 Finally, Frank Kaminsky is showing us what all the fuss was about.

With his 24 points and 12 rebounds in a Tuesday night victory over the L.A. Lakers, Kaminsky continued what has been the best streak of his young NBA career. He is averaging 19.9 points and 7.8 rebounds over his past 10 games, and that doesn’t include the team-high 33 points he scored in the “Rising Stars Challenge” during the NBA’s all-star weekend.

“I’m a ‘confidence’ player,” Kaminsky told me by phone from Los Angeles Tuesday. “And I’ve got a whole lot of confidence right now.”

Only 23, Kaminsky absolutely has to be part of the Hornets’ resurrection – if there is going to be one. He’s young, he’s cheap (by NBA standards, anyway) and he can score. But the No. 9 overall pick of the 2015 draft has had problems with consistency and defense and also sometimes has a tendency to get down on himself if his first couple of shots miss.

“I will over-think a situation sometimes,” Kaminsky said. “There’s something to be said for just playing.”

A month ago, Kaminsky said he and Hornets coach Steve Clifford had a long talk about his career. Clifford talked about the need for more focus and intensity from Kaminsky and indicated more playing time would be forthcoming if he could only see that. Kaminsky has buckled down, benefited from the extra minutes available due to Cody Zeller’s nagging quad injury and has shuffled between center and power forward with aplomb.

I’m a ‘confidence’ player. And I’ve got a whole lot of confidence right now.

Unfortunately, Kaminsky’s biggest sustained “up” of his career has coincided with a massive “down” by the Hornets (26-34), who are 3-13 over their last 16 games entering Thursday night’s road game at Phoenix. So his surge has been somewhat lost in the shuffle.

But it should not be, for what is happening with Kaminsky right now bodes well for the future. Kaminsky, a former consensus national player of the year at Wisconsin, is the sort of player fans can embrace if he can just play well enough to let them do so. He has a quirky, smart personality and is delightfully engaging on Twitter, where he opines on everything from Lady Gaga to “Game of Thrones” to Skittles.

▪  Kaminsky has published his real birthday on Twitter (April 4), but claims the year he was born was 1896. “That’s as far back as Twitter would let me go,” he said. So, according to his Twitter page, Kaminsky will actually turn 121 years old later this season.

▪  When legendary golfer Arnold Palmer died, Kaminsky went to the nearest store and bought every “Arnold Palmer” canned drink he could find in what he called his “homage to The King.” He then posted a picture of his haul.

Only way I know how to pay homage to The King. Went to the store and bought every Arnold Palmer #RIPTheKing pic.twitter.com/84ZEjc2EEz

▪  At the 2017 NBA all-star game, Kaminsky showed up in a bizarre ensemble -- an olive green jacket, a T-shirt and dark sunglasses. He said he did not purposely mean to mimic the outfit a character in the “It’s Always Sunny in Philadelphia” sitcom once wore, but when it was pointed out that he did, Kaminsky gleefully publicized the resemblance himself. “Because I love that show anyway,” he explained.

Look I was goin for... pic.twitter.com/StG0nGcvx0

All of that is fun, but losing has not been. Kaminsky is sensitive to the fact that while he is playing well that his big games have not usually translated into victories as of yet.

“We just need to finish games as a team in the fourth quarter,” he said. “If we do that, we can still be a playoff team.”

And if the Hornets ever get really good, the world is going to rediscover Kaminsky.

Big Frank on a tear

In his past 10 games, Frank Kaminsky has put up many of the best numbers of his two-year NBA career. Over those 10 games Kaminsky has:

▪  Scored 20 or more points five times, including a career-high 27 points against Toronto and 24 in a road victory over the L.A. Lakers Tuesday night.