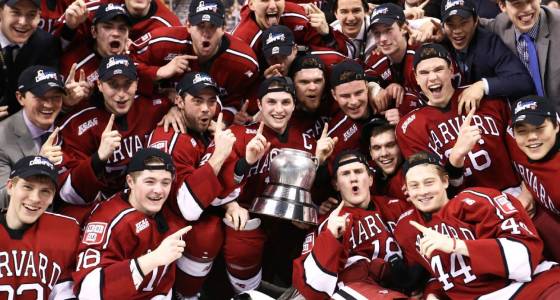 BOSTON -- Nathan Krusko scored his second goal of the game to break a second-period tie, Merrick Madsen made 14 saves, and Harvard beat Boston University 6-3 Monday night to win its first Beanpot championship since 1993.

The Crimson won Boston's college hockey bragging rights for the 11th time overall and the first under former Harvard and Boston Bruins forward Ted Donato. Luke Esposito, Ryan Donato and Alexander Kerfoot also scored for Harvard, and Adam Fox clinched it with a length-of-the-ice empty-netter to make it 6-3 with 1:50 to play.

Jake Oettinger stopped 40 shots for the Terriers and was named the tournament's top goaltender. BU has won the most Beanpots -- 30 times in its 65 years -- and most recently in 2015. BU and Boston College had combined to win every Beanpot since 1993.

Earlier Monday, Northeastern beat Boston College 4-2 in the consolation game, sending the Eagles to their first fourth-place finish since '93.

Krusko scored the only goal in the first, but Kieffer Bellows and Clayton Keller scored goals 2 minutes, 53 seconds apart from each other early in the second period to give the Terriers a 2-1 lead. Esposito -- the nephew of hockey Hall of Famer Mark Messier, who was in the crowd -- tipped in a slap shot from Clay Anderson to tie it midway through the second.

With 66 seconds left in the period, Krusko made it 3-2. Kerfoot made it 4-2 with Harvard holding a 5-on-3 advantage to start the third, and then Donato took it over the blue line, outside the faceoff circle and back in front to give the Crimson a three-goal lead with 7:13 remaining.

Just 33 seconds later, Keller scored his second of the game to bring BU within two.

But with the BU goalie out for an extra attacker at the 2:30 mark, Madsen dove forward for a glove save to force a faceoff in the Harvard end. The Crimson won the draw, and as Fox fell to the ice at his own goal line, he sent the puck toward the empty Terrier net.

As it rolled just inside the left post, the Harvard players began to celebrate a feat that hadn't been accomplished since before they were born.

Harvard's last victory had come two years after their coach graduated from the school in 1991, after having lifted both the Beanpot and NCAA championship trophies in 1989. The Crimson hadn't even won their opening-round game since 2008. (Donato took over the program in 2004).