Hard truth: The Bulls make big money, so they don’t have to make big moves

The Bulls aren’t in the mood for a full rebuild, but apparently they absolutely love the idea of remaking the roster every so often to keep it ill-equipped for winning.For details, see Thursday’s trade of Doug McDermott, Taj Gibson and a second-round... 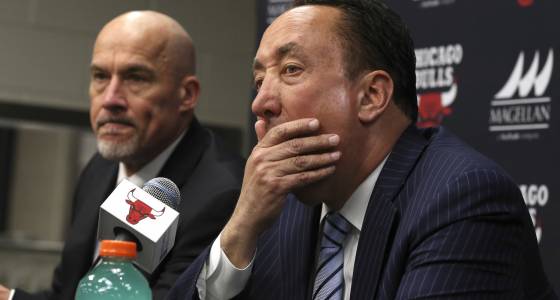 The Bulls aren’t in the mood for a full rebuild, but apparently they absolutely love the idea of remaking the roster every so often to keep it ill-equipped for winning.

For details, see Thursday’s trade of Doug McDermott, Taj Gibson and a second-round draft choice for a handful of magic beans.

Bulls management wonks don’t know how to make a bad team better, but injecting a bad team with a new and different kind of bad is the house special.

Bulls management wonks claim they are trying to rebuild on the fly. They believe they can remain competitive while getting younger and more athletic in pursuit of building a championship team.

It’s the same half-measure that made the White Sox unwatchable, and even the Sox couldn’t stand their own smell, so they committed to a full rebuild.

Difference here is, the Bulls sell out every home game and they are worth $2.5 billion, according to Forbes valuations. That’s all you need to know. No. 1 Rule in Life: Follow the money.

John Paxson reacts to the Bulls' trade with the Thunder on Thursday, Feb. 23, 2017. (K.C. Johnson/Chicago Tribune)

John Paxson reacts to the Bulls' trade with the Thunder on Thursday, Feb. 23, 2017. (K.C. Johnson/Chicago Tribune)

So, it’s funny to see the decoding of John Paxson’s words after he said the Bulls are building with Jimmy Butler, not around him the way the Bulls once built around Derrick Rose and certainly around Michael Jordan.

Paxson’s words were interpreted as a hint to a Butler trade sometime between the lottery and the draft, and I’m thinking, do you people realize we’re talking about Bulls management wonks who always overrate their talent?

When it comes to making a notable deal — a deal that involves, say, a former No. 1 overall pick or a supposed shooter for whom they traded up — Bulls management wonks only seem to say yes when the goal is to dump bodies and not necessarily make the roster more talented. Welcome to Thursday.

Because there’s no urgency. Because a franchise that missed the playoffs last year and has struggled to get to seventh place this season is the fourth-most valuable in the NBA.

As long as you continue to fill the United Center, the Bulls will continue to give you the worst three-point shooters in a three-point-shooting league.

They say the team that gets the best player wins the trade, and I’m wondering, was there a best player in the Bulls-Thunder deal?

The Nikola Mirotic-for-Jahlil Okafor rumor would’ve been a perfect complement for the deal that moved the Bulls backwards at the deadline.

The 6-foot-11 Okafor is a back-to-the-basket player who isn’t much for defense. He would be a terrific acquisition if this still were the era of Kareem Abdul-Jabbar dragging Walton and Lanier up and down the court for 48 minutes.

Mirotic, meanwhile, is a three-point shooter who can’t shoot.

So there you go: a trade for two guys without NBA games.

And Fred Footwipe would’ve made Okafor better the way he has made all the other young players better, right?

The more that Paxson tries to talk up Fred Footwipe as a coach, the more unfit he looks as an NBA coach. I mean $5 million a year for on-the-job training?

And if this doesn’t work, the Bulls will just find more guards who can’t make shots.