Duke was rolling.Seven straight wins. A seemingly healthy bunch. A consistent starting lineup to battle for the ACC race after its worse conference start in more than 20 years.Then, the injury bug resurfaced. Veterans Amile Jefferson and Grayson Allen have... 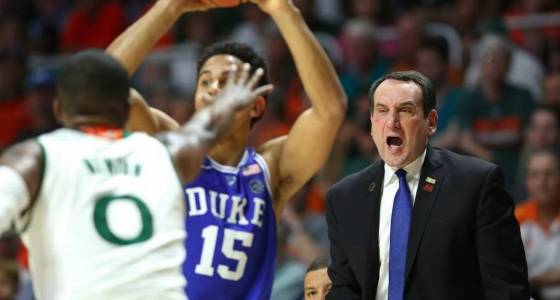 Seven straight wins. A seemingly healthy bunch. A consistent starting lineup to battle for the ACC race after its worse conference start in more than 20 years.

Then, the injury bug resurfaced. Veterans Amile Jefferson and Grayson Allen have been playing banged up the last few games. A left ankle injury was too much for Allen, who didn't play in No. 10 Duke's 55-50 loss to Miami at the Watsco Center on Saturday.

The defeat eliminated the Blue Devils (22-7, 10-6) from the regular-season race.

They'll face Florida State back at home Tuesday, but possibly without not just one, but two key pieces.

Coach Mike Krzyzewski won't know the status of Allen until assessing how he responds to therapy, and he'll also have to decide on Jefferson.

Jefferson scored a season-low four points for the third time this season, missing both of his only free throw attempts on the day. The graduate student forward is four points away from 1,000. Sophomore Luke Kennard reached the mark Saturday.

Jackson came off the bench for 16 points and three assists in 29 minutes. Sophomore guard Luke Kennard also scored 16 in a game-high 40 minutes, going 6-of-20 from the floor. Only freshman Jayson Tatum logged more attempts in a game this season with 22 against Elon on Dec. 21.

Allen, who's played with foot and ankle issues throughout the season, last rolled his ankle in Duke's 65-55 win at Virginia on Feb. 15. He and Jefferson have battled on the court through injuries, but Duke's most important games are a couple of weeks away.

“I'll look at the big picture in what we're doing,” Krzyzewski said of reserving Allen and Jefferson. “While we're doing that, it doesn't mean we can't win. No matter what, we were in a position to win today, you know. Whatever's happened, our guys fought really hard and were in a position to win, but we didn't. I'm not going to make my predictions based off what I think we'll do. I'll base it on how we're moving along.”

Jackson's solid game at Miami stabilized Duke in the second half, where Hurricanes guard Bruce Brown hit two defining free throws and a dunk to seal their fourth straight win. He finished with 26 points.

Jackson sank consecutive 3-pointers to force a one-point game with Miami (20-8, 10-6) leading midway through the second half. The Canes went into the locker room with a 22-21 lead after a Ja'Quan Newton layup secured their lead and deflated Duke.

The Blue Devils missed their first five shots after halftime.

Kennard, who reached the 1,000-point threshold after two late free throws, nailed a triple with eight seconds left for a 53-50 Duke deficit, but Brown scored the big dunk off the inbounds pass.

The Blue Devils shot 31.8 percent from the floor.

“Obviously, Grayson, he's a big player for us,” Kennard said. “He's one of our leaders and obviously, it's tough when he's out. We want him to continue to get better.”

Duke returns to Cameron Indoor Stadium to host Florida State, which it lost to, 88-72, on Jan. 10. The Blue Devils will close the regular season at UNC, which claimed a share of the ACC after beating Pitt, 85-67, on Saturday. Duke defeated the Tar Heels, 86-78, at home on Feb. 9.

“Those two games are an opportunity for us to get back on track and salvage and save our season,” Jefferson said.