As Isaiah Graves said, Catasauqua High School’s boys basketball team was “hyped” for its first chance to play at Pottsville’s historic Martz Hall. And the Rough Riders showed that excitement by almost burning the venue down in the... 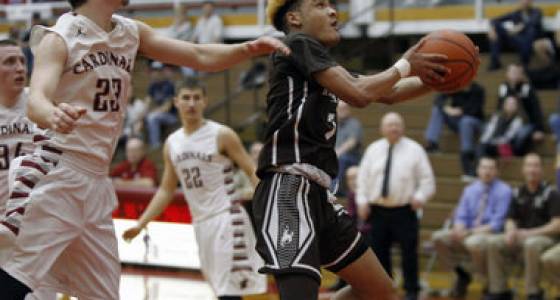 And the Rough Riders showed that excitement by almost burning the venue down in the third quarter on Saturday night.

Fifth-seeded Catasauqua started the second half with a scorching 17-0 run and went on to defeat No. 4 Pine Grove 70-50 in the first round of the Districts 11/1 Class 3A tournament.

The Rough Riders (9-13) advance to play top-seeded Valley Forge Military Academy on Wednesday at a time and site to be determined.

After heading into half trailing 30-27, Graves, a junior, knocked down a 3-pointer to start the game’s decisive run, which included five 3s (two from Graves, two from Jaylen Green and one from Colin Hawk).

Green swished the last long ball to make it 44-30 with 4:12 left in the third quarter, and the Rough Riders had turned a three-point deficit into a 14-point lead in less than four minutes.

“All the momentum was with us. We were down by three and I just told my team, ‘Let’s go. We are not losing this game’” said Graves, who scored a career-high 35 points. “… It felt so good. I knew we were going to win the game as soon as we hit a couple 3s.”

Catasauqua coach Eric Snyder said the explosive final two quarters were indicative of his team’s preparation for the game.

“The second half is how we played the last three days of practice,” he said.

It just took a little while to shake off some Martz Hall jitters.

“I think we were nervous in the first half with the awesomeness of the gym,” Snyder said. “None of them had ever been here. They all had their cellphones out the first 10 minutes (after we arrived).”

Graves – predictably – has a pretty high opinion of the site now.

“It feels great to play here,” he said. “The court is great.”

The Rough Riders hit 13 3-pointers in total. Once their outside game was established, Graves ate Pine Grove up off the dribble.

“When you’re hitting shots, obviously, it opens things up and then Isaiah was able to go to the basket,” Snyder said.

Catty only has one senior (Hawk). So, after narrowly missing the Colonial League tournament, Snyder stressed making the most of the team’s 17-day layoff before districts.

“I said that we’ve got to take advantage of this and get all the experience we can,” he said.

The coach, in his 25th season, has been pleased with how the group has competed despite its lack of height.

“This is one of the smallest teams I’ve ever coached,” Snyder said. “We fought, scrapped and clawed all year with these kids — and they played hard.”

That size situation is going to be brought into the spotlight against Valley Forge (22-4). The academy has three players listed taller than 6-foot-7, including Division I prospect Abraham Deng (6-foot-10).

“We’re going to spread them out and see what happens,” Snyder said.