Galleries Videos Authors Polls
Famagusta 19
clear sky
BUSINESS EDUCATION ENTERTAINMENT HEALTH POLITICS SCIENCE SPORTS TECHNOLOGY
09:26 Giro d'Italia 2022: Schedule, route, profile and where to watch stage...
09:01 The deadline for Andalusians residing abroad to request a vote by mail...
08:16 Miró and Chillida meet again in Zabalaga
07:15 Eugenio Recuenco presents
06:15 The difficult digestion of Barça after falling in the
05:26 This is what the 4,500-year-old droppings found at Stonehenge explain
04:45 Russia will create 12 new military units for the future expansion of NATO
03:21 The TSJ of Madrid condemns the former number two of the Police for the...
02:15 Why loans with very low payments are a bad idea
01:55 Four injured by stabbing in a stab attack in Norway
BIST
2.380,90
GOLD
952,90
USD
15,98
GPB
20,11
EUR
17,06

The Hague: After PSV Eindhoven goalkeeper Jeroen Zoet made the save, he made a costly mistake.Zoet saved a close-range header from Feyenoord defender Jan-Arie van der Heijden, but as he clutched the ball to his chest, a screen on referee Bas Nijhuis’ wrist... 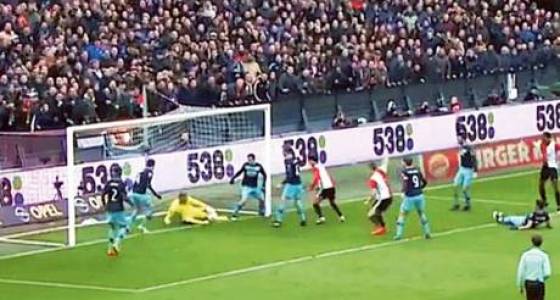 The Hague: After PSV Eindhoven goalkeeper Jeroen Zoet made the save, he made a costly mistake.

Zoet saved a close-range header from Feyenoord defender Jan-Arie van der Heijden, but as he clutched the ball to his chest, a screen on referee Bas Nijhuis’ wrist lit up.

Nijhuis looked down, saw the word “goal” flashing on the screen and awarded the Dutch league leaders the winning score in the 2-1 victory. Sunday’s result took Feyenoord a step closer to their first league title since 1999 and likely ended two-time defending champion PSV’s title aspirations.

“I did everything I could to prevent the ball crossing the line,” Zoet told PSV TV. “According to the system, it was one millimetre over the line.”

PSV may not have been happy with the 82nd-minute decision, but Dutch football authorities testing technological help for referees were.

Protesting PSV players surrounded Nijhuis after he awarded the goal, but later accepted the decision and said they should have done more to win a match that was likely the last gasp in a faltering title defence. PSV are now in third place, 11 points behind Feyenoord with 10 matches to play. Ajax are second, five points behind.

Compounding PSV’s misery was the fact that Feyenoord’s De Kuip Stadium is the only Dutch ground with goal-line technology in the second half of the season. Before the winter break, the cameras were at Ajax’s Amsterdam Arena.

There have been other goals awarded by the technology in the Netherlands, but none at such a crucial stage in such a high-profile match.