GOODYEAR, Ariz. — Matt Moore kept it simple in his first spring start for the San Francisco Giants. 2 Weeks Ago2 Weeks Ago2 Days AgoThe former Rays All-Star struck out three in 11/3 innings and the Giants beat the Cincinnati Reds 9-5 on Sunday. "I... 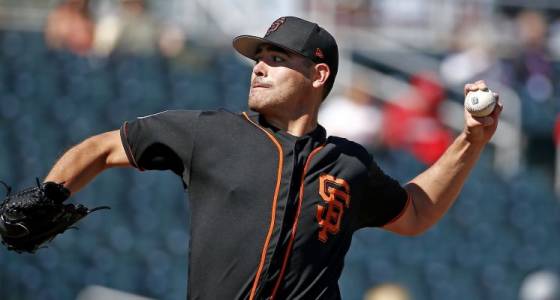 The former Rays All-Star struck out three in 11/3 innings and the Giants beat the Cincinnati Reds 9-5 on Sunday.

"I told Nick (Hundley, his catcher) let's just go with what's working and what's going to get guys out," Moore said. "I was actually pretty satisfied with each pitch that I throw. The big positive is nothing hurts."

The left-hander gave up a hit and a run and walked two in his first-ever Cactus League appearance. Moore had spent his entire career with Tampa Bay until a trade during last season.

"It was good. We got him where we wanted," manager Bruce Bochy said. "They just need to get out there and get some work. Build 'em all up."

The Giants acquired Moore for a package including infielder Matt Duffy, and Moore helped San Francisco to a wild-card berth. The 27-year-old has had control issues in his career, but he finished strong last season with eight innings of three-hit ball against the Dodgers on the final day of the regular season.

He followed that by going eight innings, striking out 10 and giving up just two hits against the Cubs in Game 4 of the NL Division Series.

Moore is likely to slot third in the rotation behind Madison Bumgarner and Johnny Cueto.

After a promising start to his career, Moore had Tommy John surgery in 2014 and didn't regain a regular rotation spot until last season. He was 13-12 with a 4.08 ERA between Tampa Bay and San Francisco.

Moore feels he is finally all the way back after logging 1981/3 innings in the regular season in 2016.

"I did get a little more rest, but maybe not in preparation for the season as much as to recover from a full season," he said.

"I usually stink in spring training. Last year was the first time I ever had a reasonable ERA and had some outings where you could see that you could carry it into the season. In the past, it had been the opposite where you know we still got some work to do as April's coming around. … But I feel like today was a good building block. We got four outs, so I think today was a good start."

Moore hopes to build off his strong finish to 2016, but noted things often can come together late this season — a tough formula to replicate early in the season.

"At times, it's not always clicking in the right direction, but I think last year … I don't think I can try any harder," he said. "It's more just being a little bit more in tune with how my body's feeling, what I'm capable of doing, and getting strike one. I think if I throw strike one I have a hard time walking guys."