NFL free agency begins on March 9. The Giants, who currently have approximately $31.5 million in salary cap space, figure to be players in free agency as they attempt to fill some of the holes on their roster. We're going to take a position-by-position... 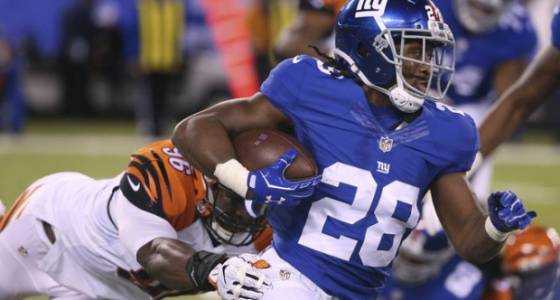 NFL free agency begins on March 9. The Giants, who currently have approximately $31.5 million in salary cap space, figure to be players in free agency as they attempt to fill some of the holes on their roster. We're going to take a position-by-position look at how the Giants will approach free agency. Next up is running back.

*Paul Perkins: Signed through the 2019 season

*Shane Vereen: Signed through the 2017 season

*George Winn: Signed through the 2017 season

*Will Johnson (fullback): Signed through the 2017 season

The Giants need to add a running back to complement Perkins.

The Giants had success in the draft last year, landing Perkins in the fifth round. They could follow a similar approach this year by taking another running back in the mid-to-late rounds. D'Onta Foreman (Texas), Corey Clement (Wisconsin) and James Conner (Pittsburgh) could be some mid-round options that would provide a bigger complement to the shifty Perkins.

What to expect in the offseason

The Giants cut veteran Rashad Jennings early in the offseason to clear $2.5 million in cap space. Jennings' days were numbered when Perkins took over as the feature back late last season.

While the Giants clearly have confidence in Perkins, he's not built to be a workhorse. Finding a back to share carries with the 5-foot-10, 208-pounder should be a priority this offseason.

The Giants could try to find an affordable veteran in free agency, such as Green Bay's Eddie Lacy or New England's LeGarrette Blount. But youth is a preference in the backfield and this draft class is considered deep at running back.

The Giants should be able to find a quality back in the draft to join Perkins and Vereen, who will remain the third-down back. Re-singing Darkwa, who is a restricted free agency, would be a cost-efficient way to add depth.