CHICAGO -- Kevin Garnett recorded an inspirational video message aimed at pumping up the Celtics after they lost the first two games of their first-round series against the Chicago Bulls. Boston players suggested it set the tone for their 104-87 Game 3 triumph... 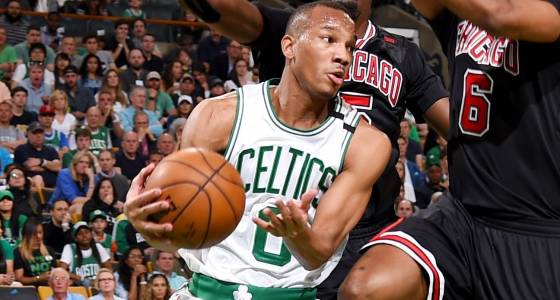 CHICAGO -- Kevin Garnett recorded an inspirational video message aimed at pumping up the Celtics after they lost the first two games of their first-round series against the Chicago Bulls. Boston players suggested it set the tone for their 104-87 Game 3 triumph on Friday night.

After being shown the video by teammate Avery Bradley, Celtics guard Isaiah Thomas decided to play it for the team before tipoff at the United Center. In typical Garnett fashion, the video was high energy and rife with expletives. But for a Boston team in need of a jolt given not only its lackluster play but Thomas' coping with the tragic death of his sister, the message had the intended effect.

"Everybody was kinda pumped up. I almost felt like he was in the locker room with me again," said Bradley, the only player on Boston's roster who played alongside Garnett.

"It kind of energized us a little bit before the game, and it reminded us of what we're playing for and what the Celtics stand for. ... It's funny, because he was our leader when he was here. He's still part of this Celtics family. For him to go out of his way to send us a message like that, that means a lot to all of us.

Propelled by Kevin Garnett's pregame pep talk Friday, the Celtics had a much different look after beating the Bulls to cut their series deficit to 2-1.

"Like I said, it was a reminder of Celtics family. We have to play a certain way because they are watching. There's a respect, the way that we play, and we have to play hard. Every single time we step on the floor, we have to leave everything out there. That has to be our mindset."

Thomas left the team on Wednesday morning to be with his family in Tacoma, Washington, after his younger sister, Chyna Thomas, died in a single-vehicle accident last Saturday. He returned late Thursday night, and teammates said he had more pep than he did while trying to battle through Games 1 and 2, both Bulls victories.

When Thomas saw the video from Garnett, he set it up so it would boom through speakers in Boston's locker room when the team viewed it as a group before Friday's game.

Thomas did not address reporters following Friday's win, but he was inside the locker room, interacting with teammates after he scored 16 points over just 31:27 to aid the Celtics victory. A smiling Thomas certainly helped shift the mood in a Boston locker room that understandably had a cloud hanging over it in recent days.

"Isaiah, it was his idea to play it before the game," Bradley said. "And it got us going a little bit."

Celtics forward Jae Crowder, who has often expressed his fondness for Garnett and the way he played, said the message clearly resonated in the locker room.

"To me, personally, it was everything," Crowder said. "It was just a little motivational speech. He said we looked like a team that wasn't having fun. We looked like a team that wasn't soaking the moment. We've just got to play for one another and play for the moment at hand, which is the playoffs, and have fun with it. Basically that's all he was saying, with a little more KG into it."

Added Crowder: "It was on the phone, but we put it on a Beats Pill [speaker]. We played it very loud in here. With him talking loud, you can only imagine how it got us pumped up. He was excited, we were excited. It was a great speech just for us to let go and have fun."

Second-year guard Terry Rozier said the video was exactly what the Celtics needed to hear.

"Oh man, that was exciting -- he got the whole team pumped, man," Rozier said. "Outrageous hearing from a legend who played for this organization. He's been through it all -- got to the Finals, won the Finals. Just to hear him was inspirational. Especially going into a game like this.

"[The Celtics] definitely needed to hear it. [Thursday] seemed like everybody was still down, and we told guys just to tell jokes to lighten up a little bit. We came out aggressive in the first half and end of the second half, and we just wanted to change that going into Game 3."