Fultz laughs off Ball's boast, wants to be MVP

Potential No. 1 overall pick Markelle Fultz says he found Lonzo Ball's boast that he's the better player "funny" and that he expects his rivalry with the UCLA point guard to continue in the NBA.Editor's PicksLonzo Ball: 'I'm better' than Washington's... 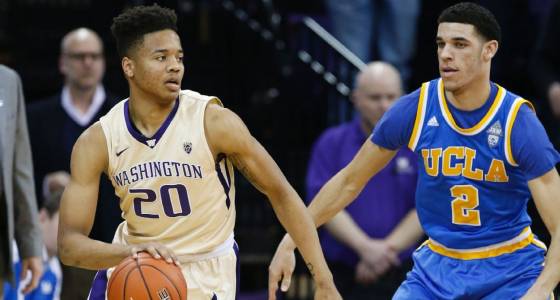 Potential No. 1 overall pick Markelle Fultz says he found Lonzo Ball's boast that he's the better player "funny" and that he expects his rivalry with the UCLA point guard to continue in the NBA.

Lonzo Ball addressed the NBA draft debate between himself and Markelle Fultz, saying he's better than the Washington star.

Last month, Ball told ESPN 710 LA that he considers himself a better player than Fultz, citing his ability to "lead a team better" than the Washington star.

"I have a lot of respect for him, and he's supposed to say that. Anyone that's your competitor is going to think that they're better," Fultz said in an interview with SI Now. "To me, it was just funny, he just motivated me to work harder and be sure I put myself further and further in front."

Ball and Fultz are widely considered to be the top two prospects in this year's NBA draft. Both are point guards, and Fultz says he expects the rivalry that began in the Pac-12 to continue in the NBA.

"He's going to be [playing] my position, so ... if he happens to be the point guard I'm going against, then yeah, I want to get him out the way," he said.

Fultz told Sports Illustrated that to be picked No. 1 overall would fulfill a lifelong dream. He also has lofty goals after he's selected.

"No. 1 is big for me because I've been dreaming about it all my life. I want to come in and kill it. I want to be rookie of the year ... honestly, me? I want to be MVP next year," he said.

Fultz and Ball were projected as the No. 1 and No. 2 overall picks, respectively, in the latest mock draft by ESPN's Chad Ford.

The Boston Celtics, who own the rights to swap first-round picks with the Nets, have the best odds (25 percent) of landing the No. 1 overall pick based on Brooklyn's league-worst record this season. Fultz said he'd relish the chance to play with Isaiah Thomas if he were to go to Boston with the top pick. He is close with Thomas and worked out with the Celtics star in Washington last summer.

"We always talk about the opportunity. That would be the craziest backcourt. The way he scores, the way I can pass, and the way I can score ... we can switch between the 1 and 2," he said.

The 6-foot-6 Ball averaged 7.7 assists per game -- the best mark in Division I -- and also was UCLA's third-leading scorer at 14.6 points per game. The star freshman led the Bruins to the Sweet 16, where they were eliminated by Kentucky.