CORVALLIS -- Bright Ugwoegbu took his spot next to defensive coordinator Kevin Clune, holding a play card while his Oregon State teammates ran through another 11-on-11 session without him. It's all Ugwoegbu can do right now, as the junior starting outside... 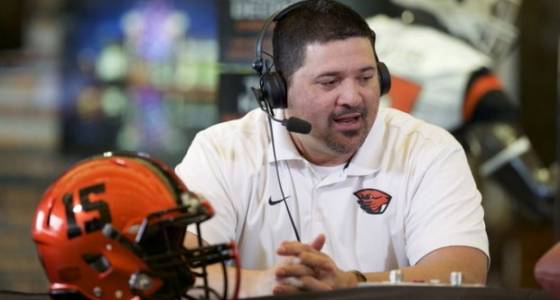 CORVALLIS -- Bright Ugwoegbu took his spot next to defensive coordinator Kevin Clune, holding a play card while his Oregon State teammates ran through another 11-on-11 session without him.

It's all Ugwoegbu can do right now, as the junior starting outside linebacker continues to recover from a leg injury that forced him to miss the stretch run of the 2016 season. Ditto for Joah Robinett and Shemar Smith, who are also sidelined with injuries.

That presents a prime opportunity for Kee Whetzel and Hamilcar Rashed, two redshirt freshmen getting a heavy dose of practice reps for a Beavers defense aiming to improve at stopping the run and rushing the passer in 2017.

"Sometimes it seems slowly, but they're coming along," Clune said of Whetzel and Rashed.

Position coach Chad Kauha'aha'a learned last season that he cannot be afraid to play freshmen, as a rash of injuries forced Smith, Robinett, Shemiah Unutoa-Whitson and Andrzej Hughes-Murray into action during their first season in Corvallis. And with Hughes-Murray moving inside, Whetzel and Rashed are the next guys up.

At 6-foot-3 and 213 pounds, Whetzel is undersized but speedy after primarily being recruited as a wide receiver out of Clearwater, Florida. Rashed, meanwhile, possesses a 6-foot-4, 233-pound frame and "just keeps growing and growing," Kauha'aha'a said, after coaches considered pulling his redshirt at times last season.

Both acknowledge they still have work to do in mastering OSU's playbook. Rashed in particular is aiming to improve his alignment at his new "B" linebacker spot, before letting his physical tools take over.

"You really have to learn this playbook and do everything right to actually get to play," Rashed said.

Ugwoegbu, who totaled 54 tackles (11 for loss) and 5.5 sacks last season, is scheduled to be back on the practice field this fall as one of OSU's biggest defensive leaders. And after playing so many youngsters in 2016, the Beavers should now have depth at outside linebacker.

Whetzel and Rashed hope they prove to be reliable options the spring.

"(My goal is) not to disappoint," Whetzel said. "Come out here and make a statement for myself for being a first-timer on the field."