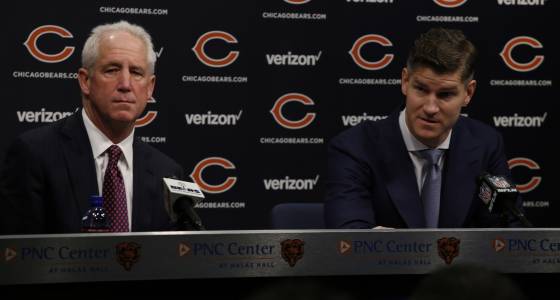 In the meantime, before free agency commences March 9, we're left to ponder their protected responses to questions about Jay Cutler's status, the team's quarterback situation at large, Alshon Jeffery's foray into the open market and other issues about a roster in need of significant upgrades.

Here are four things we learned from Pace's and Fox's media sessions at the NFL scouting combine:

Cutler's situation with the Bears is "fluid."

That was the adjective Pace repeated when discussing Cutler, whose eight-year tenure appears to be nearing its end as he recovers from surgery to repair the labrum in his throwing shoulder. The Bears continue to evaluate new directions at quarterback, monitoring the trade market and a free-agent supply that could grow before the new league year.

"It's our responsibility to have a plan in place — which we do — that's flexible and adaptable as the landscape is changing," Pace said.

But consider all the traits he and Fox have recently said they value in a quarterback: durable, productive, consistent, able to lift players around him. Those don't describe Cutler, who has not played a full season since 2009 and has one playoff win in his 11-year career.

After missing the playoffs in six straight seasons with Cutler as the franchise quarterback and finishing last in the NFC North in the last three, this regime recognizes the benefits of a fresh start. For now, they remain in constant contact with Cutler's agent to handle the divorce as smoothly and productively as possible.

"One of the things with Jay I value is his agent, Bus Cook," Pace said. "We're close, and I think at times like these that relationship is important because we can be honest and transparent."

The Bears sense they have satisfactory options at quarterback.

Bears quarterback Brian Hoyer  jogs off the field after a 17-16 loss to the Jacksonville Jaguars at Soldier Field on Oct. 16, 2016.

Bears quarterback Brian Hoyer  jogs off the field after a 17-16 loss to the Jacksonville Jaguars at Soldier Field on Oct. 16, 2016.

This early in the offseason, there's no telling how the Bears quarterback depth chart will set. Much depends on veterans who are released or traded this month and how teams evaluate this year's college prospects.

It's, dare we say, fluid. Even moments before Pace spoke, ESPN reported the Patriots don't intend to trade backup Jimmy Garoppolo. Either the Pats truly want to keep him or it's a ploy to coax better trade offers for the former Eastern Illinois star.

Pace understands why so much QB talk surrounds the Bears, and part of that involves hypothetical scenarios, such as whether the Bears would seek a veteran to serve as a bridge to a draft pick.

That discussion Wednesday wound its way to veteran Brian Hoyer, who threw six touchdowns and no interceptions in six games last season before breaking his left arm. Hoyer was 1-4 as a starter, but Fox appreciates how Hoyer protected the ball, especially given the defense's problems forcing turnovers.

"Brian is unique in that he makes very quick decisions," Fox said. "He's very smart, been in a lot of different systems. He's been on the field a lot in the NFL. I thought he did a good job."

On the topic of a veteran quarterback, Pace explained his priority for a productive dynamic in the position group's meeting room.

Fox elaborated: "A guy that raises all boats, as far as work ethic. When the horn goes off, he's not (in) track shoes out of the building. We call it (a) first-in, last-to-leave type of mentality. Successful teams I've been a part of had that intangible, and that's something we're trying to build on."

Pace's draft philosophy seems to lead the Bears away from a quarterback at No. 3.

Sure, the Bears have quarterback options. But how compelling are they, really?

None jumps out, especially in the draft. It's unfortunate the Bears' tremendous need at the position doesn't match up well with the quality — or lack thereof — of this year's class and having the third overall pick.

Because the Bears don't have an established high-ceiling quarterback prospect in their system, there's urgency to find one in this year's draft. Pace, however, must compartmentalize that pressure and mitigate the risk of busting with the third overall pick.

"You have to get value," Pace said. "You get competitive and you know you need this position — and it doesn't happen the day of the draft, it happens in the months preceding the draft. You start convincing yourself that you need to start pushing a certain position up the board. And that's when the mistake is made."

The top of the draft is loaded with defensive options, but there's a growing consensus among evaluators that no quarterback is among the best five players or even the top 10.

Kyle Long's performance after eschewing shoulder surgery will be a major focus in 2017.

Photos of the Chicago Bears' first-round draft pick in 2013.

Pace said Long opted not to have the labrum in his left shoulder surgically repaired after at least three doctors signed off on a non-surgical rehabilitation. Long had complications after right ankle surgery in November, including an adverse reaction that included vomiting. He said he lost 30 pounds.

After Long initially injured his shoulder in the second exhibition game in August, he hoped to play through the pain and diminished strength. It took a toll on his performance, and he planned to eventually have surgery. That has now changed.

Will shoulder limitations resurface once training camp begins? Will Long get past the significant ligament damage in his ankle in time to begin training camp? Will he ever be the same player he was before the injuries?

Long will answer those questions over time. For now, Pace is at least optimistic about the shoulder.

"He's kind of a freak genetically," Pace said. "His shoulder's doing good. There's going to be maintenance as far as strength and everything, which he's doing. We don't have a lot of concerns with that right now."