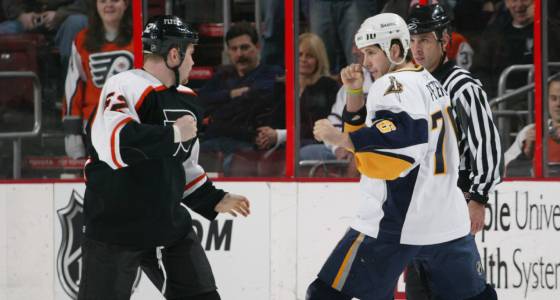 BUFFALO, N.Y.—Former NHL enforcer Andrew Peters has been suspended indefinitely as coach of a youth hockey team pending a Buffalo police investigation into his role in an on-ice brawl.

Buffalo Junior Sabres president Kevyn Adams announced the suspension Sunday, a day after the melee occurred during a game between the Peters-coached 15-and-under team and the Ontario-based Hamilton Junior Bulldogs.

A video posted on YouTube shows the fight escalating into the Sabres’ bench, when Peters becomes involved in attempting to separate the players. At one point, the 36-year-old appears to shove a Hamilton player backward onto the ice.

Over The Boards: It’s been bye now, lose later for NHL teams

Buffalo police were called to the downtown arena to investigate the brawl, but no charges were filed. The investigation continues, police spokesman Michael DeGeorge wrote in an email.

The Junior Sabres suspended Peters immediately after the game.

“We are very disappointed in the series of events that unfolded,” Adams, a former NHL player, said in a statement. “We are currently reviewing the situation and in the meantime have suspended head coach Andrew Peters indefinitely until the matter is over.”

According to a person familiar with the situation, Peters told Junior Sabres officials that he slipped while attempting to get one of the Hamilton players away from Buffalo’s bench. The person spoke to The Associated Press on condition of anonymity because the conversation was to remain private.

Listed at six-foot-four and 240 pounds, Peters was known for his physical style while playing six NHL seasons, including five with the Buffalo Sabres. He scored four goals and seven points, and totalled 650 penalty minutes in 229 career games from 2003 through 2010.

He has maintained a home in Buffalo and works for the Sabres as a co-host of a show titled “The Enforcers,” which is broadcast daily on TV and radio.

The association’s regional president, David Braunstein, told the AP he will investigate what happened during the brawl. Braunstein said he intends to view the video and seek out other possible footage, as well as speak to the on-ice officials.