For one night, the Knicks aren’t a messy soap opera

If you’re a Knicks fan, you probably are hoping the noise will quiet for a while, and all the outside distractions that seem to haunt this team will start to fade.The All-Star break has come and gone. So has the trade deadline. There should be no more talk... 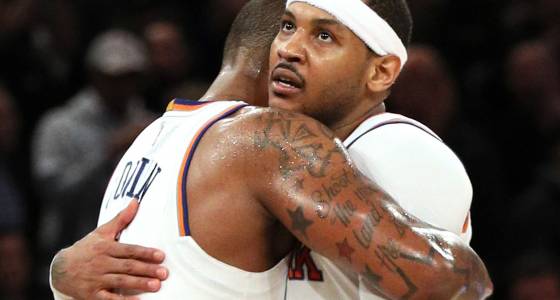 If you’re a Knicks fan, you probably are hoping the noise will quiet for a while, and all the outside distractions that seem to haunt this team will start to fade.

The All-Star break has come and gone. So has the trade deadline. There should be no more talk about Carmelo Anthony and his no-trade clause or whether Derrick Rose will be a Knick for the remainder of the season. For better or worse, the Knicks are stuck with the status quo, which on the surface, isn’t a very encouraging prospect.

Even with a 110-109 win over the 76ers on Saturday night at the Garden, it’s probably too late to make a late run for the playoffs. Too many injuries, too much inconsistency and a shortage of confidence and urgency have doomed any realistic hope this team can produce an extended run of success.

What should be expected from the rest of this season is the basketball to be about basketball. At least it was Saturday night, when Anthony made a short jumper with 0.3 remaining to give the Knicks the win. It was a happy ending to a game in which the Knicks blew a 12-point lead with five minutes to go.

The goal for the remainder of the season should be to avoid the self-sabotaging that existed up to the All-Star break. Injuries cost Rose, Kristaps Porzingis and Joakim Noah playing time, but it was the off-the-court issues that eliminated any feeling of solidarity and zapped whatever potential the Knicks had for 2016-17.

Rumors of Anthony being shopped and whether he would waive his no-trade clause became a daily discussion. Then needless friction between Anthony and team president Phil Jackson erupted over Twitter post by Jackson that seemed to endorse criticism of Anthony. Add owner Jim Dolan’s feud with former Knick Charles Oakley, and the Knicks became about everything but basketball.

You would hope such calamity is in the past. Then again, these are the Knicks. Heading into Saturday’s game, there were reports Rose was planning a quick trip to Chicago late Friday before it was squashed by the Knicks. The Knicks claimed Rose was joking about the trip. Whatever story you believe, let’s hope it isn’t a sign of more of the same foolishness that has distracted the Knicks for most of this season. Enough already.

The Knicks owner made it clear this is Jackson’s mess to clean up. “Go ask Phil” is about all we’re going to get from Dolan, who seems determined to make Jackson fulfill his contract, whether he likes it or not.

Jackson still has time to change course on his legacy of becoming one of the NBA’s best coaches and worst general managers. His free-agent signings of Rose and Noah appear to be failures, but Willy Hernangomez, Porzingis and Mindaugas Kuzminskas are pieces to be kept. There still is time to create a competitive culture, but the self-sabotage has to stop.

Things haven’t been right with the Knicks since the beginning of this season. Rose spent all of training camp in court, where he was found innocent of rape allegations. Noah has been hampered with injuries throughout the year, and Porzingis missed another game Saturday night with an ankle injury.

Hornacek has struggled to find a rotation that is dependable on the both ends of the floor, especially early in games when the Knicks often start slow and at the end of games when they fade down the stretch.

Improvement on the defensive end is imperative but requires energy, trust and effort, elements the Knicks displayed at times dispatching the Sixers.

The Knicks know they aren’t good enough to win with less than maximum performance. Any drop in effort leaves them helpless against good teams.

It is up to Jackson, Hornacek and the Knicks to decide how they want this season to be remembered: as the foundation for a new beginning or another waste of time.