It's beyond time for the Florida Gators to have a real, stable starting quarterback.No more fall questions.No more excuses.It's 2017, and Tim Tebow isn't walking into the Swamp with eligibility, so coach Jim McElwain and offensive coordinator Doug Nussmeier... 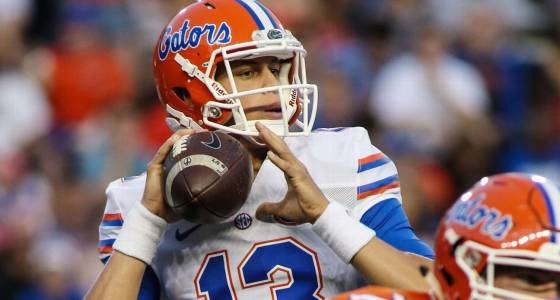 It's beyond time for the Florida Gators to have a real, stable starting quarterback.

It's 2017, and Tim Tebow isn't walking into the Swamp with eligibility, so coach Jim McElwain and offensive coordinator Doug Nussmeier need to find a quarterback for the present and future, or we're going to seriously start to question what in the world is in the Gatorade down there.

Florida has had 10 different starting quarterbacks since Tebow left after 2009. None have passed for 2,500 yards or even thrown more than 12 touchdowns in a single season.

A place synonymous with great quarterback play has become a wasteland for evaporating quarterback talent for the better part of the past decade.

But it appears that some hope has been restored within the walls of Ben Hill Griffin Stadium. While every quarterback taking snaps this spring has exactly zero collegiate reps, McElwain has three quarterbacks he recruited and on campus. He has former ESPN 300 member Feleipe Franks, who almost got in last season and has a cannon for a right arm. He has three-star project Kyle Trask, who many around the program think has a ton of potential. And he also has four-star athlete Kadarius Toney, who enrolled early and will start his career at quarterback.

Franks and Trask are both redshirt freshmen and Toney is a true freshman. This fall, he'll have four-star Jake Allen on campus, and former starter/journeyman QB Luke Del Rio's shoulder should be healthy.

But as it stands now, McElwain has a trio of young, talented and raw quarterbacks who he can now mold to his liking and hopefully bring some sort of respectable passing game back to Florida's football program.

“Their understanding and really the respect of the team piece as far as how they go about their business has been great,” McElwain said of Franks and Trask when he met with media members last week. “Not to be overshadowed, there is Luke's involvement in helping them prepare to be a starter."

Del Rio was serviceable at times last year, but injuries hampered his play in the second half of 2016. Austin Appleby eventually took over and had his moments (hello, SEC East-clinching win over LSU), but he was limited as a passer (10 TDs to seven INTs) and has no more eligibility.

It's been a broken, repeating record at quarterback for the Gators, but 2017 brings new blood and what many consider -- or desperately hope -- is more potential.

The receivers are there. The running backs are solid. And the offensive line should be more than adequate this fall. If Florida is going to win its third straight SEC East title, the quarterback position must pull its weight.

Serviceable won't cut it. McElwain needs a quarterback who can actually make this offense potent again. Florida's offense needs a real passing pulse and a guy who can create plays with his head and pure arm talent, especially with a defense that lost so many important pieces.

No one is quite sure what these younger quarterbacks really are, but the coaches get to start from scratch with all of them. That's both exciting and scary, especially with front-runners Franks and Trask.

Franks has a long-range missile for a throwing arm, but has questions about his accuracy and decision-making skills. Just look at his dreadful, three-interception 2016 spring game performance.

Trask was basically a lifetime backup in high school down in Texas, but was a camp freak. He also garnered positive reviews from folks in and around the Florida program last spring, especially after his impressive spring-game showing and during the fall. But his lack of real experience in high school is a major concern.

Then, there's Toney -- the ultimate wild card. He was an impressive dual-threat quarterback for Blount (Alabama) High, throwing for 2,894 yards and 32 touchdowns and ran for 894 yards and 15 scores as a senior. He isn't the prototypical, pro-style McElwain quarterback, but the coach said he plans to add more running elements to his QB plans -- regardless of who's taking snaps. And we know that the game is moving more and more toward the dual-threat quarterback's favor -- just ask Alabama and Clemson.

Is Toney Deshaun Watson or even Jalen Hurts? Probably not, but McElwain, who tutored record-breaking quarterbacks at both Alabama and Colorado State, gets to wrap his supposed quarterback-whispering arms around him and see what happens.

"You know, I think the biggest piece we're looking for first and foremost is somebody to step up and say, 'You know what, I'm going to take this and I'm going to lead this team and help the parts around me play better,’” McElwain said.

There's a mixture of fear and enthusiasm swirling around the opening to Florida's spring practice, but the idea of McElwain grooming these guys in his image is encouraging. That puts more of the onus on McElwain, but coaching quarterbacks is where he's supposed to excel. It's his turn to finally work with his guys.

"As always, every drill is graded," McElwain said, "... whether it's routes on air, the accuracy of the throws and where it needs to be and all those type of things and understanding the importance of every moment means something. Take advantage of it."