Final: Thomas Welsh lifts No. 5 UCLA to victory over No. 4 Arizona in Tucson

TUCSON, Ariz. – An awesome offense has carried UCLA to a terrific season. The Bruins turned to rebounding and defense for what may have been their most impressive win yet. Thomas Welsh scored 12 of his 14 points in the second half, and No. 5 UCLA dominated... 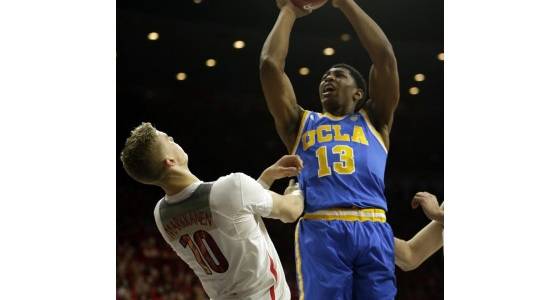 TUCSON, Ariz. – An awesome offense has carried UCLA to a terrific season. The Bruins turned to rebounding and defense for what may have been their most impressive win yet.

Thomas Welsh scored 12 of his 14 points in the second half, and No. 5 UCLA dominated the offensive boards to beat No. 4 Arizona, 77-72, in a Pac-12 showdown Saturday night.

“That’s what Tommy does,” UCLA coach Steve Alford said. “Tommy can rebound the ball and Tommy can shoot the ball about as well as any center in the country. … Obviously, there’s a lot of guys on our team that get a lot of recognition, and Tom is due some recognition because he’s a special player.”

The Bruins (26-3, 13-3) won their seventh in a row and snapped Arizona’s 21-game home court winning streak. The Wildcats (26-4, 15-2) dropped into a tie with Oregon for first place in the Pac-12 heading into the final week of the regular season. The Ducks hold the tiebreaker by beating Arizona in the teams’ only meeting.

Allonzo Trier scored a career-high 28 for the Wildcats. Parker Jackson-Cartwright added 11, and Lauri Markkanen had 10 for Arizona.

UCLA had 19 second-chance points to Arizona’s four. In the second half, the Bruins outrebounded the Wildcats, 9-1, on the offensive boards.

The Bruins’ Bryce Alford said the team’s defense had improved markedly since a team meeting following a loss to USC a month ago.

The Bruins switched to a zone most of the second half and stretched the lead to 11 twice late in the game, the last at 73-62 on Welsh’s’ inside basket with 4:38 to play before Arizona managed one final charge, finishing the game on a 10-4 run.

Markkanen’s two free throws cut the Bruins’ lead to 75-72 with 29.2 seconds to play. Holiday missed the first of a one-and-one free throw opportunity and Arizona had a chance to tie it, but Kadeem Allen, with a dislocated pinkie finger on his shooting hand, threw up an air ball from 3-point range.

Miller had no timeouts so the Wildcats had to wing it.

“No question we didn’t get a good look on the last play,” he said, “but the last play was one of hundreds of plays in the game I can go back to, a number of offensive rebounds they got that in my mind were much more effective toward them winning the game than the fact we had to heave one up at the end.”

After trailing by as many as seven points early, Arizona outscored the Bruins, 10-1, over the last 21/2 minutes of the first half to lead, 43-39, at the break. Jackson-Cartwright scored seven in the surge.

Arizona lost at home for only the second time in 69 games.

“If you get a win at Arizona and at Kentucky (Dec. 3) in the same year,” Steve Alford said, “it’s pretty special.”

With the victory, UCLA has come back to beat all three teams that have beaten them this season. After a two-point loss at Oregon on Dec. 28, the Bruins came back to beat the Ducks in Los Angeles, 82-79, on Feb. 9. USC upset the Bruins, 84-76, on Jan. 25, but UCLA came back to rout the Trojans, 102-70, on Feb. 18. ... Assuming, both teams win out, Arizona would be the Pac-12 Tournament’s No. 2 seed and UCLA the No. 3. Oregon would get the No. 1 seed and, barring upsets, would face the UCLA-Arizona winner in the conference title game. ... The Bruins return home to face Washington on Wednesday night.