Final: Lakers' season-long issues on display in loss to Thunder

OKLAHOMA CITY – The cast of characters has changed on the court and behind the scenes, but, at least for now, the end result remains the same.The Lakers suffered a 110-93 loss to the Oklahoma City Thunder on Friday at Chesapeake Energy Arena in another... 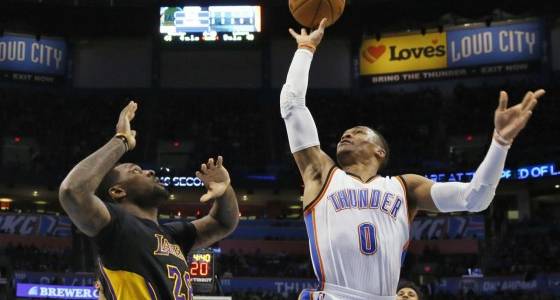 OKLAHOMA CITY – The cast of characters has changed on the court and behind the scenes, but, at least for now, the end result remains the same.

The Lakers suffered a 110-93 loss to the Oklahoma City Thunder on Friday at Chesapeake Energy Arena in another game that highlighted many of their season-long issues.

Poor shooting overall (40 for 101) and from 3-point range (7 for 35) were chief among the Lakers’ problems on a night when Oklahoma City’s best player was misfiring as well. Despite shooting only 4 for 18 from the field, Thunder guard Russell Westbrook (8 for 9 from the foul line) posted his 28th triple-double of the season and second against the Lakers with 17points, 18 rebounds and 17 assists. The Lakers had yet another sluggish third quarter in which the Thunder outscored then, 28-19.

The Lakers were expected to endure more short-term pain even after they shuffled their front office earlier this week with an eye toward the future. Lakers coach Luke Walton followed through on his pledge to lean more on his young group, acknowledging “their roles are only getting bigger now.” With the Lakers trading high-scoring sixth man Lou Williams to Houston this week for a first-round pick and Corey Brewer, the Lakers lack a definitive closer but there’s more playing time for others.

Despite shooting only 3 for 12 from 3-point range, Lakers guard D’Angelo Russell scored a team-leading 29 points on 12-of-26 shooting with six assists, four rebounds and a career-high four steals in 35 minutes.

With Williams no longer there to share ball-handling duties and shots, Lakers guard Jordan Clarkson appeared more assertive and comfortable with 14 points, five assists and five rebounds, though he was just 6 for 17 from the field.

More to come on this story.