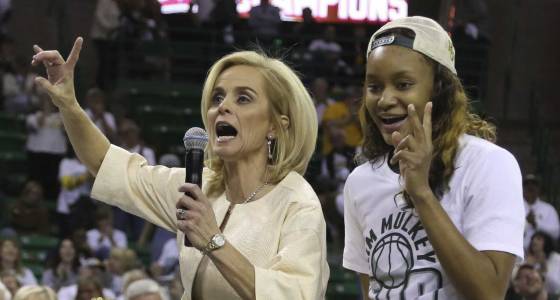 Mulkey shared some strong words for parents who might be concerned about sending their daughters to a school that is currently being sued for allowing and enabling football players to commit an alleged 52 sexual assaults in the past four years.

Specifically, she told fans that if a parent tells them they wouldn't allow their daughter to attend Baylor because of those fears, they should "knock them right in the face."

The crowd at the Farrell Center in Waco wildly cheered that statement and again cheered Mulkey when she finished her speech after her team wrapped up the regular-season women's Big 12 basketball title.

"If somebody's around you and they ever say, 'I will never send my daughter to Baylor,' you knock them right in the face," Mulkey said. "Because these kids are on this campus. I work here. My daughter went to school here. And it's the best damn school in America."

Kim Mulkeysounds off on recent national scrutiny about #Baylor and female student safety on campus after Lady Bears' win. pic.twitter.com/Jy8YUDhtBW

After the game in her post-game press conference, Mulkey said she was tired of hearing about the scandal and having it brought up by"people who don't know what they're talking about."

Mulkey said that she would send her own daughter to the school, saying the "problems we have at Baylor are no different than the problems at any other school in America."

Mulkeyexplained her comments in the post-game press conference. #Baylor pic.twitter.com/emhBU1Ytew

The scandal cost Art Briles his job as Baylor's head football coach, but the Bears' basketball programs both are thriving, with the Bears' men's team at No. 9 and Mulkey's team ranked fourth nationally.

It was the most public defense made by a Baylor coach yet.

And considering Mulkey's feisty and opinionated persona, it likely won't be her last.