Ferrari has launched its 2017 car, the SF70-H, via an online stream.The car is the latest to break cover in a week of F1 unveilings, following the launch of the Mercedes W08 on Thursday. A new sharkfin, complete with a T-wing at the top similar to Mercedes'... 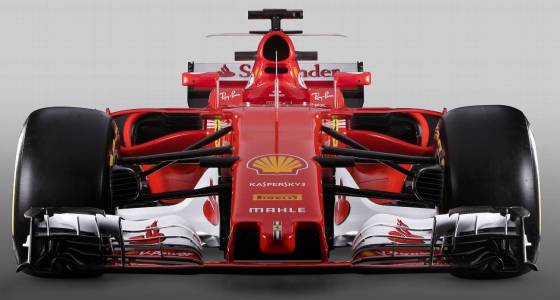 The car is the latest to break cover in a week of F1 unveilings, following the launch of the Mercedes W08 on Thursday. A new sharkfin, complete with a T-wing at the top similar to Mercedes' concept revealed yesterday, is painted white, but the rest of the livery has returned to Maranello's iconic Rosso Corsa. Aside from that, there were no radical livery changes from previous years, although the race suits worn by Sebastian Vettel and Kimi Raikkonen featured a slight white trim.

Mercedes also ran a T-wing ahead of the main rear wing during its filming day on Thursday, although not attached to an sharkfin as with the Ferrari. The opportunity appears to have come about due to a loophole in the rules towards the back of the car.

Perhaps of more interest is the bodywork around the unusually shaped sidepod openings. Shots from above also appear to reveal secondary openings on the top of the sidepod by the cockpit. The car's nose follows the stubbed end design adopted by each of its rivals except Mercedes.

The launch photos also showed a very high rake angle for the new car. Rake refers to the car altitude created by raising rear ride height in relation to front ride height -- the aggressive angle seen on the SF70-H is something normally associated with Adrian Newey-designed Red Bull cars, though the 2017 regulations lend themselves to higher rake angle on all cars.

Ferrari comes into 2017 off the back of a winless 2016, meaning the SF70-H will be tasked with an immediate return to winning ways.