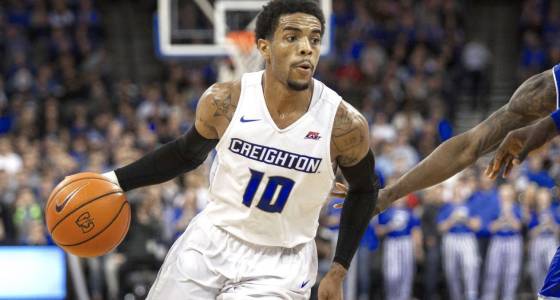 Stu Dornan, one of Watson's attorneys, told the Omaha World-Herald on Friday that Watson was en route from Philadelphia to Omaha to turn himself in.

However, Douglas County Attorney Don Kleine told the newspaper that no arrangements had been made for Watson to surrender and that the Omaha Metro Fugitive Task Force was still looking for him.

According to an incident report, a 19-year-old woman said Watson had non-consensual sexual intercourse with her in the bathroom of a midtown residence about 3 a.m. on Feb. 4.

Creighton is investigating the incident and said Thursday it continues to cooperate with Omaha authorities.

"There is no tolerance for sexual misconduct at Creighton, and all allegations will be investigated fairly and with dignity," the school said in a statement. "As the process continues, we are extending care and concern for all involved."

Mallory Hughes, another attorney defending Watson, told the World-Herald that they "adamantly" denied the allegations, saying "they are false." The characterization drew Kleine's wrath.

Creighton (22-6), ranked 23rd in the latest Associated Press Top 25 poll, announced Wednesday that Watson has been suspended from all athletic-related activities since Feb. 13. The senior suffered a season-ending knee injury last month and had surgery in his hometown of Philadelphia on Feb. 6.

Watson, who averaged 12.9 points per game, became a fan favorite after he transferred from Boston University following his sophomore season. He won't be allowed to participate in the team's senior day activities on Feb. 28.

Watson was named to the preseason All-Big East first team. He was a candidate for the Wooden Award as college basketball's top player until he tore the ACL in his left knee Jan. 16. At the time, the Bluejays were 18-1, and Watson ranked first in the nation with 8.5 assists per game.

Creighton is 4-5 since Watson got hurt.

Information from The Associated Press and ESPN's Andy Katz was included in this report.