When standout defensive tackle Fabion Foote steps into the squat rack, the whole gym stops to watch. So many plates pack the barbell there’s barely room for a clip to hold them in place. As Foote steps into place, the iron bar bends like a sapling... 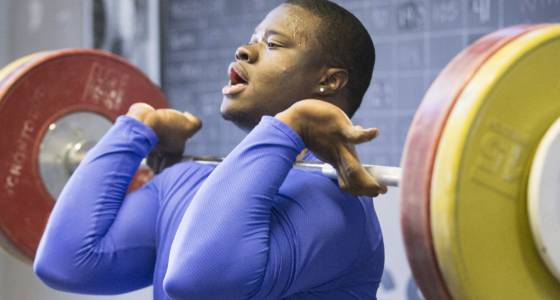 So many plates pack the barbell there’s barely room for a clip to hold them in place. As Foote steps into place, the iron bar bends like a sapling across his broad shoulders. But the fourth-year McMaster student remains rock-solid, even beneath the heaviest weight he has ever attempted: 604 pounds.

He completes the movement quickly, setting off a celebration among the athletes and coaches at Laylor Performance Systems, the downtown training centre where Foote works out while in Toronto.

Hitting a new personal best in the squat represents a checkpoint on the way to a bigger goal for the Rexdale native.

To date, 30 Canadian university football players have reached the NFL and Foote, who just finished his fourth season at McMaster, is determined to become the 31st.

So while his winter training program is aimed at next month’s CFL national combine, the six-foot-two, 285-pound Foote hopes a big performance there will earn him an NFL training camp invite.

“Since my second year in university, I knew I wanted to pursue this,” says Foote, a sociology major who graduates this spring. “I like to compare myself to what (NFL) guys are doing because that’s where I’m aiming. Yes, I would play in the CFL, but if I have an opportunity to make an NFL roster I’ll take it.”

The last decade has seen several defensive linemen graduate from Canadian university programs to the NFL.

Like, Idonije who played only one year of high school football, Foote arrived on campus without much experience. He moved to Toronto from Jamaica at 11, and didn’t play football until his final year at Thistletown Collegiate Institute. Foote says he enrolled at McMaster unsure if he even liked the sport enough to stick with it through four years of university.

Quickly, he connected with running back Wayne Moore, then a second-year player who shared Foote’s Rexdale roots and recognized Foote’s potential. And by Foote’s sophomore season the game had taken hold.

As he preps for his second CFL season, Moore says Foote’s skills and work ethic will translate well to any level of pro ball.

“We started training together in the summers and it just skyrocketed from there,” says Moore, who plays for the Montreal Alouettes. “His motivation, there’s no roof to it. He always wants to exceed his goals, and he doesn’t hold back.”

But reaching the NFL will take more than heart and desire. Making the grade means maximizing Foote’s tangible assets in a league that might view his size as a liability.

Foote points out that comparatively small defensive tackles have carved out a large NFL niche in recent seasons, and says he models his game after Aaron Donald, a six-foot-one, 285-pound tackle with the L.A. Rams.

To overcome the size deficit, Foote trains to move big weights as quickly as possible.

His strength coach, Clance Laylor, handles conditioning programs for NHLers including P.K. Subban and Joel Ward, and his downtown gym is a shrine to power and speed. On the walls hang framed jerseys of pros who train there, alongside photos of thick-limbed weightlifters hoisting heavy barbells. A flat-screen TV plays world-class weightlifting competitions on a loop.

Laylor says the lifts performed in those contests — the snatch and the clean-and-jerk — translate perfectly to football because they stress explosiveness and mobility, and prepare athletes to absorb impact and keep moving.

“We train mobility, flexibility, dexterity — the things people overlook,” Laylor says. “Football stresses you in strange positions. Your body has to be ready.”

On the leaderboard at Laylor’s gym, Foote owns the top mark in nearly every lift, but attracting NFL attention requires a different set of eye-catching stats.

After recording 17 tackles and 2.5 sacks in his first three seasons combined, Foote blossomed in 2016, logging 17 tackles, including eight for losses and seven quarterback sacks in eight games.

Beyond his on-field performance, Foote hopes next month’s CFL combine will double as an NFL audition.

In 2010, Bishop’s University slotback Steven Turner blazed a 4.31-second 40-yard dash at the CFL combine, setting an event record and earning an invite to the Chicago Bears’ mini-camp. Foote says he has studied NFL combine performances by players at his position and is confident he can compete with players on either side of the border.

“When I put up the numbers I expect to put up, I believe I’ll have a really strong opportunity,” Foote says. “A lot of my numbers are similar to Aaron Donald’s. One or two are better, but I’m not going to tell you which ones.

“We’ll just wait for the combine to see how I do.”