Expect Xander Bogaerts to break out on the basepaths

FORT MYERS, Fla. -- Xander Bogaerts has packed a lot into the past four years.He made his major league debut and won a World Series in 2013. The Boston Red Sox moved him from shortstop to third base and back again in 2014. He fell just shy of 200 hits in... 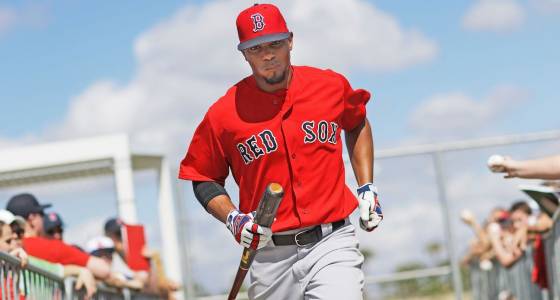 FORT MYERS, Fla. -- Xander Bogaerts has packed a lot into the past four years.

He made his major league debut and won a World Series in 2013. The Boston Red Sox moved him from shortstop to third base and back again in 2014. He fell just shy of 200 hits in 2015 and became an All-Star last season.

Maybe that explains why Bogaerts looks around the Red Sox clubhouse and, with a relatively straight face, says he's starting to "feel like I'm becoming old."

It's an absurd notion, of course, like if Dustin Pedroia claimed he was becoming tall. Bogaerts doesn't turn 25 until October. If he's old, fortysomething Atlanta Braves pitchers Bartolo Colon and R.A. Dickey must be positively prehistoric.

So for as much as Bogaerts already has achieved, he's not yet a finished product. There's still room for improvement, not only defensively but also at the plate. And with David Ortiz happily retired, the Red Sox might be better off betting on Bogaerts reaching his full potential than counting on a revival from third baseman Pablo Sandoval.

"With his impeccable intangibles, he'll add layers to what he's already accomplished," a talent evaluator from a National League team said. "This guy will most certainly continue to grow."

Bogaerts has a few ideas. Chief among them: He wants to steal more bases.

Over the past 10 years, Jimmy Rollins, Hanley Ramirez, Troy Tulowitzki and Ian Desmond are the only shortstops who have hit 20 home runs and stolen 20 bases in a season. Bogaerts took aim at joining that club last season, but he also batted in front of Ortiz, which meant the Red Sox often applied the brakes. If Bogaerts tried to run, it would open first base and allow opponents to intentionally walk Big Papi.

"I always like to steal. ... We'll definitely miss David [Ortiz] in the middle of our lineup. Hopefully that frees me up a little bit more to steal. But we'll see."

Generally speaking, manager John Farrell said the Red Sox intend to be more aggressive with stealing bases in the post-Ortiz era. Bogaerts figures to be at the forefront of that movement. He swiped 11 bases before the All-Star break last season but finished with only 13 steals in 17 attempts.

"We put the red light on him a number of times letting David hit," Farrell said. "Bogey, he's got tremendous skills. We see his base-stealing capability."

Said Bogaerts: "I always like to steal. I like that. We'll definitely miss David in the middle of our lineup. Hopefully that frees me up a little bit more to steal. But we'll see. Staying healthy is obviously the main thing, but stealing bases is something I definitely like."

Farrell has hinted that Bogaerts likely will hit more toward the middle of the order after batting primarily in the second and third spots for the past two years. The Sox prefer lefty-swinging rookie Andrew Benintendi in the No. 2 hole to break up righties Pedroia, Mookie Betts and Ramirez.

Regardless, Bogaerts will seek more consistency at the plate. He batted .294 with 34 doubles, 21 home runs, a .356 on-base percentage and an .802 OPS last season, numbers that would satisfy most players. But considering he slumped after the All-Star break, batting .253 with a .317 on-base percentage and .729 OPS, it's clear he's capable of more.

"I think Bogaerts will continue to refine his game," a scout from a rival American League team said. "He can get better at quieting down his swing and his approach some, and becoming more selective again."

When Bogaerts struggles, he gets "jumpy," in Farrell's words. His default approach is to spray pitches to right field, a la Derek Jeter, his idol while growing up in Aruba. As a result, Bogaerts tends to lunge over the plate to chase breaking pitches on the outer half, leaving him susceptible to hard stuff inside.

"I kind of dive a lot, so I kind of lock up my own self," Bogaerts said. "You have to think up the middle and use the whole field as much as you can."

Said the NL scout: "I can't say he has leveled off at all, but I think we've got a good sample of his entire scope on both sides of the ball to say he is a quality player. I won't be shocked if he actually does put up more of either home run/extra-base power or create more runs due to stellar discipline and the fact that he wants to run more. I love the guy."

Bogaerts also took measures this winter to avoid wearing down in the second half, as he did last season. For the second consecutive offseason, he worked out at Exos Performance, a training facility in Arizona. The idea: Add some muscle and weight before the season because it's probably going to come off this month while he competes for the Netherlands at the World Baseball Classic.

On Monday night, Bogaerts left Red Sox camp and hopped a flight to Seoul for first-round WBC games. He's expected to play third base for a shortstop-rich Netherlands team that also features the Los Angeles Angels' Andrelton Simmons and Didi Gregorius of the New York Yankees.

"Eating there [in South Korea] will be a bit difficult for me, honestly," Bogaerts said. "We're not used to that type of food. You know you're going to lose some weight when you go over there, the long travel, stuff like that. It was [about] putting on a little extra weight so, when you lose it, you'll be around where you want to be for the season."

A season that can see Bogaerts take yet another step forward into being one of the game's truly elite players.