Three months after announcing his decision to transfer from the Rutgers football program, quarterback Chris Laviano has picked a college destination. Laviano, who started 18 straight games from early in the 2015 season to midway through last year,... 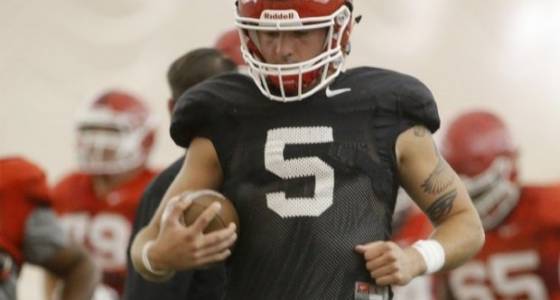 Three months after announcing his decision to transfer from the Rutgers football program, quarterback Chris Laviano has picked a college destination.

Laviano, who started 18 straight games from early in the 2015 season to midway through last year, is headed to San Diego State.

The Barstool Sports' Rutgers Twitter accoount, @BarstoolRU, was the first to report the news and a source confirmed Laviano's decision to NJ Advance Media on Friday night.

BREAKING: Chris Laviano has confirmed he will be transferring to San Diego State. Will be eligible for 2017 season. pic.twitter.com/ggpgcV2Fwl

A 6-2, 221-pound fourth-year junior from Glen Head, N.Y., Laviano will be immediately eligible to play as a graduate transfer for San Diego State, which finished 11-3 last season and was ranked No. 25 in the final Associated Press Top 25 poll.

After starting the final 11 games in a 5-7 campaign in 2015, Laviano drew the starting assignment from coach Chris Ash in Rutgers' first seven games this past season before getting benched due to ineffectiveness.

He finished with 748 yards, five touchdowns and two interceptions on 70-for-145 passing (48.3 percent) as the Scarlet Knights stumbled to a 2-10 record.

San Diego State appears to be in solid shape at quarterback, with starter Christian Chapman set to return for his junior campaign after throwing for 1,994 yards, 20 touchdowns and six interceptions last season.

But Chapman will reportedly be sidelined for spring camp with while still recovering from offseason thumb surgery. MWCconnection.com, a SB Nation website that covers the Mountain West Conference, reported San Diego State's depth is limited due to four walk-on quarterbacks leaving the program in recent months.