Without officially meaning to do so, ESPN made a persuasive case in a story this week that the Carolina Panthers have handled franchise-tag decisions worse than any other team in NFL history.In an anniversary story commemorating the 25th anniversary of the... 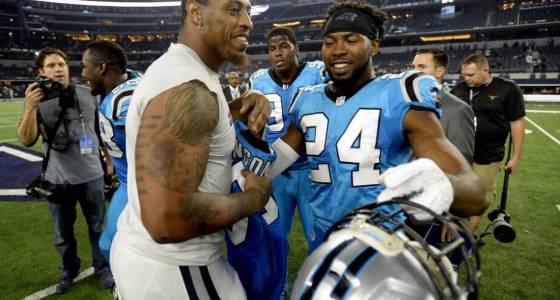 Without officially meaning to do so, ESPN made a persuasive case in a story this week that the Carolina Panthers have handled franchise-tag decisions worse than any other team in NFL history.

In an anniversary story commemorating the 25th anniversary of the franchise tag -- which allows NFL teams to keep a star player at a very high price for a single year at a time -- ESPN's Kevin Seifert looked at the 202 total times the NFL franchise tag has been used from 1993 through 2016. He ranked the five best deals ever and the five worst, and the Panthers were involved in three of those 10 overall. No other team was involved in that many of the top 10 deals.

And in every instance, the Panthers were on the wrong end of the equation. It is hard to argue with any of Seifert’s logic, either.

Seifert praised Washington was praised for fleecing the Panthers in the lopsided Sean Gilbert trade in 1998. Washington had previously franchised Gilbert, which meant Carolina had to trade to get him instead of signing him as a free agent. And the Panthers were also eviscerated by ESPN for both the Greg Hardy and Josh Norman decisions.

Excerpts from the ESPN piece on:

Hardy (the Panthers used their franchise tag on Hardy, a defensive end, in 2014). "To be fair, the Panthers extended the tag three months before Hardy was charged with assaulting his ex-girlfriend.... But in the end, the Panthers got only one game out of him (and one sack) while still paying... his $13.4-million salary. Almost no production, and nationwide scorn, proved a double scar for the franchise."

Norman (the Panthers used the franchise tag on Norman in 2016, and then rescinded it). "There was absolutely an argument to make for allowing a 29-year-old cornerback to move on... rather than committing to multiple years of eight-digit salaries. But you must have a reasonable plan for replacement, and the 2016 season proved the Panthers did not."

Note: The Panthers used their franchise tag again on defensive tackle Kawann Short this week. At least it can't work out any worse.