WOODLAND HILLS >> The El Camino Real girls soccer team is back in familiar territory.ECR will be playing for the L.A. City Section Division 1 championship after a 4-1 semifinal victory Tuesday against West Valley League rival Taft.“We came in... 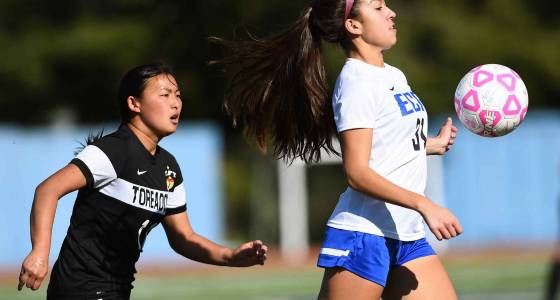 ECR will be playing for the L.A. City Section Division 1 championship after a 4-1 semifinal victory Tuesday against West Valley League rival Taft.

“We came in thinking this would be the hardest match of the year for us,” ECR’s Jordan Conlan said. “We worked really hard and played well as a team. We lost what was ours last year and all we want to do is get it back.”

Making its 19th consecutive semifinal appearance, ECR (19-2-5) now has a chance to extend its own record by winning a 14th City championship at 4 p.m. Saturday at Valley College against another league rival, Granada Hills, a 2-1 winner in overtime against Palisades.

ECR got off to a strong start and imposed its will with two goals in the first 18 minutes. Corina Sagato took a feed from the left and blasted a kick past Megan Fox in the seventh minute.

Shortly after Fox left the field on a stretcher in an ambulance following a full-force collision, Conlan found the back of the net.

Taft (18-5-2), which dropped both league matches (4-2 and 2-0) to the Conquistadores, was shaken and another goal by Zoi Lerma gave ECR a comfortable 3-0 advantage at halftime.

“They are the best program in the City, a very good team,” Taft coach Walter Escobar said. “Too bad we had to come over here. I would have liked to play at home. Last year was our year. This year is their year.”

ECR’s three victories this year against Taft have all but wiped out last year’s three losses, including a gut-wrenching 3-2 setback in the championship after holding a two-goal lead with seven minutes remaining.

Ella Davidson scored the final goal for ECR early in the second half.

Taft finally was able to settle its emotions and fought until the end.

The Toreadors continually put pressure on ECR in the final 30 minutes and broke through for a goal when returning All-City forward Kelly Diaz scored with 20 minutes remaining.

“It wasn’t our best performance,” ECR coach Eric Choi said. “It was a very heated match. Taft always plays us tough. We knew what to expect. I thought we matched up better this year than last year with some personnel changes. We also had a full year to live with that disappointment. I know it motivated me. I pushed the girls hard this year.”

Sophomore Olivia Sanchez recorded six saves for ECR, but one small streak came to an end for the Conquistadores, who will be making their 15th appearance in the City final in 17 years.

ECR gave up a goal in the semifinals for the first time in seven years. The Conquistadores held a 24-0 advantage in their last six semifinal appearances before Tuesday.

Choi cautioned his team on getting too excited.

“We have a done a little bit,” he said. “Still work to be done. Redemption does not come until Saturday.”