One of the few positions the Eagles can look the other way in during free agency and the draft is tight end. While Alabama's O.J. Howard could be intriguing in this offense, there are way too many other needs to be filled and players just as good... 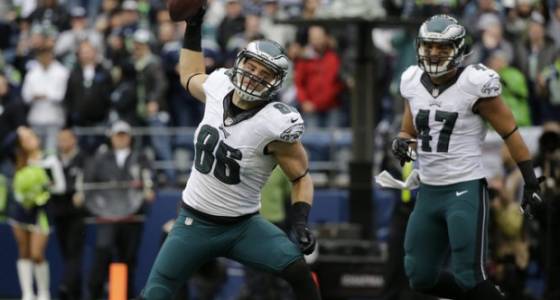 One of the few positions the Eagles can look the other way in during free agency and the draft is tight end.

While Alabama's O.J. Howard could be intriguing in this offense, there are way too many other needs to be filled and players just as good at other positions for the Eagles to think too long and too hard about a tight end.

They already have one of the best in the game in Zach Ertz and a really good backup in Trey Burton.

Ertz, who for some reason draws the ire of Eagles' fans, led the team last year in receptions (78), yards (816) and touchdown receptions (4). No, he's not Rob Gronkowski. But who is? He may be turning into another Jason Witten, however.

The similarity in the numbers is kind of eerie.

Witten, however, had his real break out year in his fifth season when he caught 96 passes for 1,145 yards. And over the next five years never caught less than 75 passes and never gained less than 940 yards.

It's up to the Eagles coaching staff to get Ertz those kind of numbers going forward. Head coach Doug Pederson's offense, which he brought from Kansas City, knows how to feature a tight end. Travis Kelce has been the Chiefs' best receiver for years.

The Eagles also have a good backup in Burton, who will become a restricted free agent March 9. The team should not just give him a tender; they should get a long-term deal completed. Burton showed last year in a limited role what he could do with 37 catches for 327 yards.

Brent Celek is still around as well, and that's the tough question. Why did the Eagles feel the need to extend the contract of the 32-year-old Celek? He's going to go down as one of the team's best tight ends, but he's not worth the $5 million salary cap hit he's costing the team this season.

What they have: Ertz, Burton, Celek

What they need: To focus the offense around Ertz. To get Burton re-signed.