Galleries Videos CONTACT ADVERTISE
Famagusta 25°
clear sky
BUSINESS EDUCATION ENTERTAINMENT HEALTH POLITICS SCIENCE SPORTS TECHNOLOGY
12:08 Guide To Online Sports Betting: How To Choose A Sportsbook
08:28 What Are Some Reasons to Consult a Brain Injury Lawyer?
09:24 Blockchain Solutions for Enterprises: How To Increase Efficiency And Profitability
07:06 How To Deal With A Car Crash In New York
17:43 Tips to keep in mind while choosing the casino site
11:34 Relation Between Employee Theft and Pre-employment Screening Check
04:37 Search your own desired site to play sports for betting
18:00 Top 3 Career Path Options for Business Analysts Preview
15:35 The history of Imen Jane, who is the influencer and the charges on the...
18:48 Sebastian Vettel's Greatest Races
BIST
1124
GOLD
459.669
USD
7.6460
GPB
9.7883
EUR
8.8844
Breaking News
Top 3 Career Path Options for Business Analysts Preview
Close

Within the span of 24 hours, Adrian Peterson and Jamaal Charles were released, which sent Eagles fans into panic mode over which used-to-be great running back the team should pursue. The answer, of course, is neither. Peterson will turn 32... 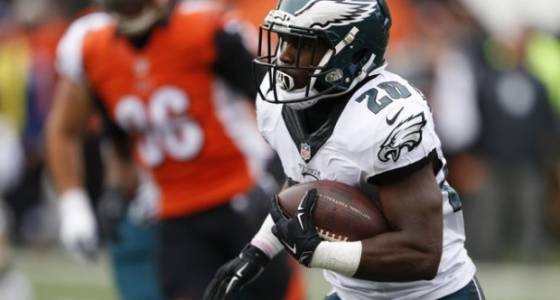 Within the span of 24 hours, Adrian Peterson and Jamaal Charles were released, which sent Eagles fans into panic mode over which used-to-be great running back the team should pursue.

The answer, of course, is neither.

Peterson will turn 32 later this month and is coming off a serious knee injury that saw him play in just three games last season and gain just 72 yards on 37 carries before he got hurt.

It doesn't seem that long ago that AP was the best back in the league. Now, he's damaged goods. He's shown in the past that he can come back from injury, or suspension, and be the best. But even his biggest supporters aren't sure any more.

Charles will turn 31 at the end of the season and has played in a total of eight games the past two years. He had 12 carries for 40 yards in the three games he barely played in 2016.

Yes, he knows Doug Pederson's offense, because it's basically the same one he ran in Kansas City where he was one of the top backs in the AFC. But again eight games in two years.

"It's over,'' the same executive said of Charles. "He just can't stay healthy anymore. There's nothing left.''

The Eagles don't need an old band-aid at the running back position. They need another young back to pair with second-year man Wendell Smallwood to grow with quarterback Carson Wentz.

There are plenty of those in this year's draft, or if the Eagles prefer to use the draft to fill their glaring holes at cornerback, wide receiver, linebacker and on the offensive line, than there are younger more durable backs in free agency, such as the Raiders' Latavius Murray, a 230-pound bruiser, who scored 12 touchdowns last season.

What they have: Wendell Smallwood, Darren Sproles, Ryan Mathews (for now), Byron Marshall.

What they need: Someone to pair with Smallwood in a back by committee approach that Pederson seems to favor.

Analysis: Mathews will be gone once the two sides agree on an injury settlement (an injured player just can't be released). Sproles, in his final season, will do what he does and be a good 3rd-down back. Marshall will come to camp, but is a back-up type player at best.