Cristiano Felicio had no idea he was thwarting history.The Brazilian big man jumped over Dwyane Wade and knocked the ball away, thus denying Wade the final rebound of the Bulls' 117-99 cakewalk over the Cavaliers on Saturday night. That rebound would have... 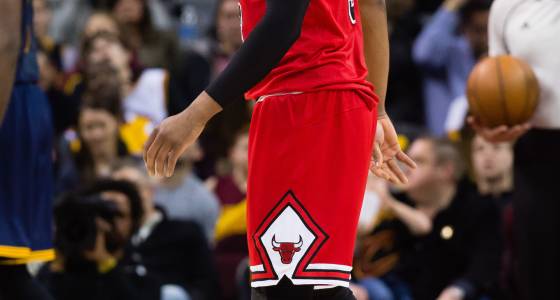 Cristiano Felicio had no idea he was thwarting history.

The Brazilian big man jumped over Dwyane Wade and knocked the ball away, thus denying Wade the final rebound of the Bulls' 117-99 cakewalk over the Cavaliers on Saturday night. That rebound would have given Wade his fifth career triple-double and first since Feb. 4, 2011.

The history part would have come with Wade matching Jimmy Butler, who posted his third triple-double with 18 points, 10 assists and 10 rebounds. January 3, 1989, is the only time in franchise history that two Bulls posted triple-doubles in the same game. And, yes, it was Michael Jordan and Scottie Pippen.

"Hate?" Wade said, playfully fielding a question about Felicio. "No. Strongly dislike, though. I told him I'm not even going to act like I'm not mad at him. He said he didn't see me down there, so he took a shot at my height."

Yep, it's that kind of postgame vibe when the Bulls took advantage of LeBron James being out with strep throat and made a season-high 15 3-pointers with a season-high-tying 34 assists.

The Bulls traded away their best 3-point shooter in Doug McDermott and now have made double-digit 3-pointers in consecutive games for only the second time all season.

Cameron Payne made his Bulls debut by playing the entire second quarter. He joined the 3-point fun when he made his first two attempts but also had two bad turnovers.

Payne, 22, is unquestionably the centerpiece of the deal that also netted the Bulls Joffrey Lauvergne, who made a brief second-quarter appearance, and Anthony Morrow.

"I just want to come help us win. That's all I'm about is winning," Payne said. "I think I'm an instinctive player."

An NBA draft lottery pick in 2015, Payne played well in spurts for the Thunder but was slowed by two foot fractures and, more prominently, playing behind Russell Westbrook.

"There really wasn't a lot of time for me because he plays like 38 minutes and he played at speed 10 every night. It's tough to be behind him," Payne said. "But he taught me a lot on and off the court. And I really appreciate him for it.

"My foot feels great. It's 100 percent. I don't think it will be lingering at all. At first, it was just a blemish, a little stress fracture. So they put the pin in. I guess I just hit it real hard. They said it was one in a million. It hit right underneath the screw. Now it's back like nothing ever happened. I'm blessed for sure."

Layups: Michael Carter-Williams joined Paul Zipser back in Chicago after the guard experienced patellar tendinitis. Hoiberg said no timetable has been set for Carter-Williams' return. … Morrow joined Carter-Williams as the second Bull in five months to surrender No. 1 after Derrick Rose supporters expressed strong backlash via social media. Like Carter-Williams, Morrow expressed humor and self awareness when asked about it. "Derrick's a great guy, and I know what the city means to him. I know what he means to the city. And fans are a part of the sport and they're part of the fan base, so I'm going to respect it."