Although it appears seven-time Pro Bowl defensive end Dwight Freeney wants to be back in Atlanta next season, his possible return shouldn't keep the Falcons from pursuing pass-rush help through the draft or via free agency.The 37-year-old Freeney told ESPN's... 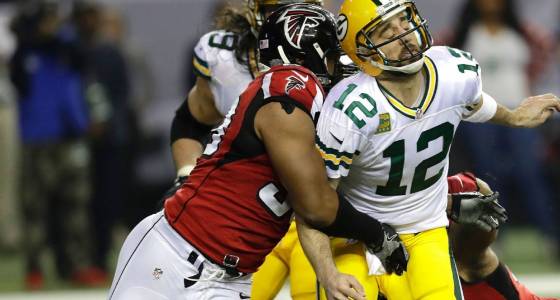 Although it appears seven-time Pro Bowl defensive end Dwight Freeney wants to be back in Atlanta next season, his possible return shouldn't keep the Falcons from pursuing pass-rush help through the draft or via free agency.

The 37-year-old Freeney told ESPN's Jim Trotter on Monday that he "most likely" will return for a 16th NFL season. Freeney went on to say he'd probably come back if the Falcons wanted him.

Freeney's veteran savvy and leadership certainly are assets to the defense. At the same time, he would be the first to say his legs aren't what they used to be, as expected of a veteran with 209 regular-season games and 5,056 defensive snaps under his belt. So the Falcons would be wise to find a younger edge rusher to pair with reigning NFL sacks leader Vic Beasley Jr. for years to come.

The draft would be the wise way to go for the Falcons, considering that most of the top pass-rushers heading toward free agency (which begins March 9) are either already locked down by the franchise tag or will be too expensive to pursue anyhow. The Falcons are expected to have between $26 million and $29 million in cap space when the new league year starts, based on a projected salary cap of between $166 million and $168 million. And the priority apparently will be re-signing their own players rather than making a big splash.

The upcoming NFL combine in Indianapolis will give the Falcons a closer look at top draft prospects such as Barnett, Harris and McKinley, among others. McKinley intends to go through the combine testing before having shoulder surgery.

Beasley, coming off a 15.5-sack, six-forced-fumble season, will be the guy the Falcons rely on to lead the pass rush in 2017 and beyond. Defensive end Adrian Clayborn, who was second on the team behind Beasley with 4.5 sacks in '16, is recovering from a torn biceps suffered this past postseason. Clayborn's relentless style gives the Falcons something to look forward to, but his bad luck with injuries is yet another reason why coach Dan Quinn and general manager Thomas Dimitroff have to find more pass-rush help.

The emergence of nose tackle Grady Jarrett, who tied a Super Bowl record with three sacks, is certain to help bolster the Falcons pass rush. So could the return of versatile defensive lineman Derrick Shelby, who suffered a season-ending Achilles tear after playing in just six games. But in order for Quinn to play the attacking style he favors, finding another strong edge rusher is crucial.

Freeney, with his signature spin move, still could be that guy in spurts. But again, the Falcons have to think well beyond just next season. And Freeney, with 122.5 career sacks, won't play forever.