DURHAM, N.C. -- Duke junior guard Grayson Allen, attempting to bring the ball up the floor, was being harassed by Florida State’s Xavier Rathan-Mayes. Seemingly during every pivot and direction change, Rathan-Mayes was poking at the ball and twice deflected... 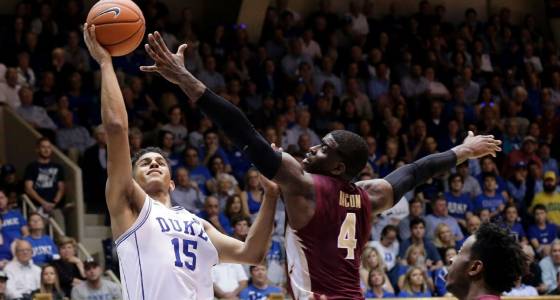 DURHAM, N.C. -- Duke junior guard Grayson Allen, attempting to bring the ball up the floor, was being harassed by Florida State’s Xavier Rathan-Mayes. Seemingly during every pivot and direction change, Rathan-Mayes was poking at the ball and twice deflected it before Allen lost control of the ball and knocked it out of bounds.

This was Allen’s return to action on Tuesday, though it was clear he was still hobbled by his left ankle. He injured it against Clemson on Feb. 11 and played through it for three more games before being held out of this past Saturday’s 55-50 loss at Miami.

Allen said his ankle is wrapped a bit tighter for support, but it was clear that he’s lost a touch of his speed and explosiveness.

Frank Jackson, however, has not.

And until Allen is back fully healthy -- he was limited to season lows of 16 minutes, two points and three shot attempts -- the Blue Devils need Jackson to make the most of his opportunity.

"Well he is an attacker," Duke coach Mike Krzyzewski said. "Frank is unbelievably talented and tough ... and you could see it at Miami. He just was different, he was better."

The 6-foot-3 freshman guard made his ninth start of the season Tuesday night against the Seminoles and his first since a win over Pittsburgh on Feb. 4. He had averaged 23.3 minutes per game, but with Allen limited Jackson played 33. He hadn't played more than 30 minutes since a victory over Appalachian State on Nov. 26.

Jackson was no longer as hesitant against the Seminoles as he’d sometimes been this season coming off the bench. He followed his 16 points against Miami with a career-high 22 points in Duke’s 75-70 win over the ‘Noles.

“That’s what I do, I stay aggressive," Jackson said. "Coach is always telling me to be myself and go out there and do my thing. ... [The Seminoles] really pressure the wings, so our back doors, our drives to the basket were open because they were kind of focused on their man.”

During one stretch that carried from the first half into the second, Jackson scored 10 straight points for the Blue Devils. And he started the second half with 13 of their first 15 points.

It was the first time Jackson has scored in double figures in consecutive games since duplicating a 15-point effort against both Georgia Tech and Boston College on Jan. 4 and 7, respectively.

“He’s improved a lot and he’s getting a lot more comfortable out there,” Allen said. “He’s a lot more poised with the ball and he’s handled the pressure well. We obviously have belief in him because we’ve seen him do it multiple times. He had a lot of experience at the beginning of the year, which I think really helped him.”

Early in the season, it seemed that Jackson could score consistently for Duke.

Jackson scored in double figures in his first eight games to open the schedule. That included 11 points against both Kansas and Michigan State and 21 points against Grand Canyon.

But those early games came when the Blue Devils were without Jayson Tatum, Harry Giles and Marques Bolden in their rotation. When that trio slowly trickled back into the lineup, Jackson didn’t have the same impact while trying to figure out his role.

Even with Jackson’s improvements of late, he’s neither experienced the jarring finality of an ACC tournament loss nor played in and delivered in an NCAA championship game.

Allen has done both those things.

Krzyzewski noted, “our program is about the veterans,” and nothing is more valuable in the postseason than having experienced players like Allen, Amile Jefferson and Matt Jones, who have played on the big stage before.

The Blue Devils need Allen, their third-leading scorer, to be the player capable of dropping 25 points against North Carolina as he did in the last game he played injury-free. He’s just not sure when that will happen.

“I don’t know, I’ll just keep coming along, just keep working, just keep playing and try to get it back, I guess,” Allen said. “There’s no definite answer on when, really.”