STANFORD, Calif. -- It was a light day on Thursday for the No. 6 Oregon Ducks a day after their latest buzzer-beater. With two days off before facing Stanford on Saturday, the Ducks completed only minimal workouts, using a light practice and weight session... 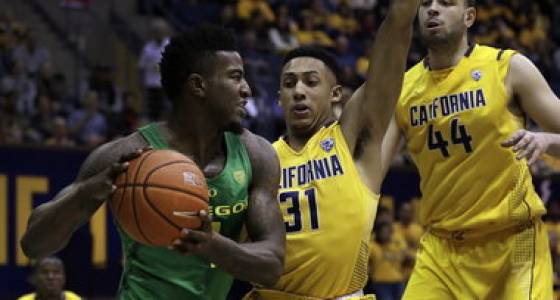 STANFORD, Calif. -- It was a light day on Thursday for the No. 6 Oregon Ducks a day after their latest buzzer-beater.

With two days off before facing Stanford on Saturday, the Ducks completed only minimal workouts, using a light practice and weight session to get their bodies right for the final game of this Bay Area road trip.

It didn't come without its excitement, however. Guard Dylan Ennis happened to be following the NBA trade deadline news when he was caught off-guard by something: His brother, Tyler, was traded from the Rockets to the Lakers.

"I seen it through Bleacher Report and then Tyler Facetimed me like two seconds after," Ennis said. "It's great to be in the NBA, but when you grow up as a kid, it's the Lakers and Boston and Michael Jordan on Chicago. Traditional teams like that, like the Lakers, this is a dream come true for him."

Ennis would like to get their himself someday, but right now, Ennis' short-term dreams are set on completing Oregon's second Bay Area sweep in the last three seasons.

Before the Ducks swept Stanford and Cal two seasons ago, the Ducks hadn't won both games in the Bay in the same trip since 1976.

This one couldn't come at a more important time for the Ducks. Wednesday's buzzer-beating win over Cal kept the Ducks right on the heels of the Arizona Wildcats in the Pac-12 race. With Arizona facing the Pac-12's No. 3 team UCLA on Saturday, a win for the Ducks will either mean a tie for first place in the conference or a bit of extra padding over the Bruins heading into the season's final week.

The Cardinal are a bit better of a team now than when the Ducks beat them the first time in Eugene in January. Since the 69-52 loss in Eugene, Stanford has only gone 3-4 since, but has claimed wins over Utah and Cal, while also defeating Oregon State on Wednesday.

The Cardinal's chances against Oregon are boosted by Reid Travis, who missed the first game against the Ducks with a shoulder injury. Travis leads the Cardinal with 17.6 points and 8.6 rebounds.

"Reid Travis is a really talented player. They're at home. Big crowd. Senior Day. They're going to give us their best shot and we have to be ready for that," Oregon coach Dana Altman said. "They're much better at home, especially with him in the lineup."

The Ducks have certainly had their issues this season away from home. All four losses this season have come on the road and Wednesday's win over Cal, while exciting, featured a first half in which Oregon scored just 16 points and shot just 29 percent. But Oregon's big second half, capped by Dillon Brooks' winner with 0.2 seconds left, didn't just give Oregon the win on Wednesday, it likely dramatically improved their chances for Saturday.

"I would have been sick if we had lost, especially like last year when California beat us bad," Brooks said. "We wanted it and it was great to come out with a victory. We are still trying to fight for the Pac-12 first seed."