The Oregon Ducks have been no stranger to recruiting drama on the quarterback front in recent years. In 2015, Oregon finished second for a handful of elite signal-callers before finally offering and snaring Travis Jonsen, while also adding graduate transfer... 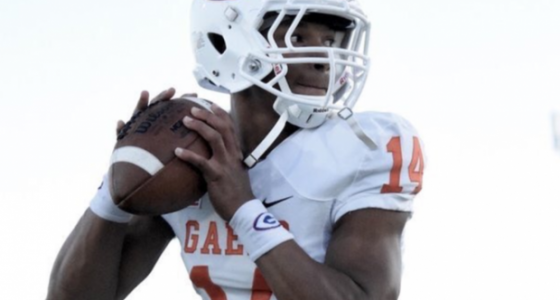 The Oregon Ducks have been no stranger to recruiting drama on the quarterback front in recent years.

Not to be outdone, 2017 provided its own unique flair, as Oregon's previous staff bungled the recruitment of Elite 11 MVP Tua Tagovailoa only to see the new staff come to the rescue by flipping Parade First-Team All-American Braxton Burmeister from Arizona.

Clearly hoping to avoid that fate in the 2018 recruiting cycle, Oregon has sent out several offers to quarterbacks and hopes to find a fit early.

But even with scholarships extended across the country, the new staff appears to be primarily focused on Bishop Gorman High School (Las Vegas) signal-caller Dorian Thompson-Robinson, the nation's No. 2 dual-threat quarterback.

As it turns out, that interest is mutual.

On Monday evening, the 6-foot-2, 190-pound signal-caller trimmed his list to 12 schools and stated he will be making a summer decision.

Recruitment isn't fully shutdown but is getting pretty close. One of these schools will have my word soon ... God bless. pic.twitter.com/M6Wdlaugae

In truth, Oregon's inclusion is far from a surprise, as Thompson-Robinson has long held interest in the Ducks.

The Bishop Gorman product had intended to take an unofficial visit to Eugene over the summer, but he canceled after the commitment of Colson Yankoff, who has since re-opened his recruitment.

Under coach Willie Taggart, that mutual interest has been rekindled.

"With the new coaching staff, Coach Taggart and stuff, I'm pretty comfortable with Oregon," he told The Oregonian. "I talked to (a former Oregon player) and he kind of got me in touch with Coach Taggart. It took about a week or two, and he offered me on the spot, so that was pretty cool."

That offer was Oregon's first to a 2018 quarterback, and marked Thompson-Robinson as a priority.

With the Ducks making the latest cut, along with summer visit plans in the works for the Nevada gunslinger, Oregon is clearly in the mix for one of the nation's top passers in 2018.