Dodgers notebook: Clayton Kershaw ready to move past back questions

GLENDALE, Ariz. >> Clayton Kershaw’s back no longer pains him. Questions about his back, however, do.“Yeah, all good,” he said dismissively Saturday when the inevitable question came up after his first outing of the spring.Kershaw... 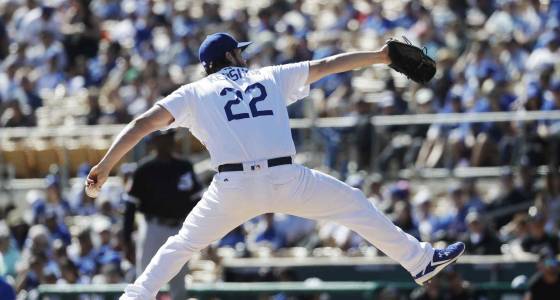 GLENDALE, Ariz. >> Clayton Kershaw’s back no longer pains him. Questions about his back, however, do.

“Yeah, all good,” he said dismissively Saturday when the inevitable question came up after his first outing of the spring.

Kershaw threw 12 pitches to retire the three batters he faced, striking out one of the Chicago White Sox, then he went to the bullpen to throw the equivalent of another inning.

“It was OK,” Kershaw said of his day’s work. “Fastball command wasn’t as good as I wanted it. That’s probably the most important thing first time out, getting your fastball command to be what you want it to be. Everything else kind of works off that.

“I got behind every batter today but the results were OK. I got three outs. I’ll take it for today and get ready for the next one.”

Dodgers manager Dave Roberts has also been dismissive about any lingering effects from Kershaw’s back injury last season. There has been nothing this spring to reminder anyone of the 75 days he spent on the DL.

“No. Clayton and I and the training staff communicated all winter so there’s no surprise for us where he’s at now,” Roberts said. “ If we didn’t know his history of last year, we wouldn’t think anything of it. He looks great. He obviously adjusted some of his offseason workouts but he looks great.”

History is not something Kershaw gives much weight. With Hall of Fame credentials already building, he comes to spring training with the same mindset every year.

“I never want to take for granted it’ll be there when the season starts,” he said Saturday. “So when something doesn’t work in spring I’m going to stress out about it and worry about it until I fix it. I’m not going to say, ‘Oh, I’ll figure it out at some point’ even though that might be the case. I feel like I have to harp on it and stress on it until I get it where I want it to be.

“Sometimes it doesn’t happen in spring but most of the time I feel pretty good coming out of it. I feel like I’m on the right track so far.”

Newly-acquired second baseman Logan Forsythe took the Dodgers’ first at-bat of the spring, batting leadoff in their Cactus League opener on Saturday. Roberts mentioned Andrew Toles and Andre Ethier as left-handed options to bat leadoff but said he does like Forsythe at the top of the order.

“I do. Throughout his career, he’s got a DNA of getting on base,” Roberts said of Forsythe, who had a .333 on-base percentage as the Tampa Bay Rays’ primary leadoff hitter last season. “I’ve known Logan for a long time and vs. right, vs. left he conducts an at-bat, he gets on base. So I like him up there somewhere at the top. And also his ability to run the bases, go first to third and things like that.”

To make sure he’ll be able to do “things like that” all year long, Forsythe received an injection of Synvisc in his left knee earlier this week. Synvisc is a lubricating fluid that supplements the fluids in joints affected by arthritis or cartilage deterioration.

The treatment is not uncommon. Third baseman Justin Turner (who had microfracture surgery on his left knee following the 2015 season) also gets them and right-hander Zack Greinke got the lubricating injections in his pitching elbow during his days with the Dodgers.

“It’s just precautionary,” said the 30-year-old Forsythe who had surgery on that knee in high school. “I asked (the Dodgers’ medical staff) if there was anything I could do to stay ahead of it.”

Forsythe spent the past three years playing on the hard surface of Tropicana Field. Even though he was an infielder “it’s still a concrete slab right underneath (the dirt) and with all the defensive shifts we used I spent more time on the turf than you’d think.”

He said his knee would “act up” occasionally “but I never missed a game because of it.”