GLENDALE, Ariz. — A solid 6-foot, 215 pounds, Julio Urias does not look fragile. Not walking around a big-league clubhouse and certainly not on a pitcher’s mound.But history says he is.“I think the data is very clear that if you’re... 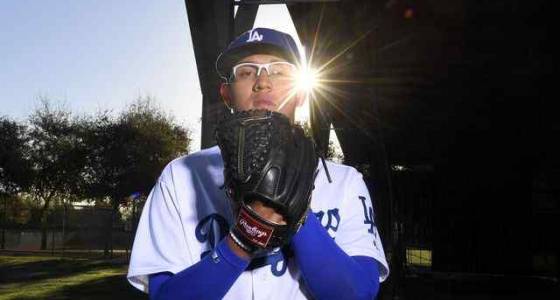 GLENDALE, Ariz. — A solid 6-foot, 215 pounds, Julio Urias does not look fragile. Not walking around a big-league clubhouse and certainly not on a pitcher’s mound.

But history says he is.

“I think the data is very clear that if you’re throwing too many innings before the age of 24, it dramatically decreases the likelihood of you throwing a lot of innings after the age of 30,” said Urias’ agent, Scott Boras, whose staff has done extensive research on the topic. “You have to remember — most of these players at a young age — they feel nothing. They feel great. No complaints. Larry Dierker, Fernando Valenzuela, Dwight Gooden — from generation to generation there are precocious stars. … When you’re a precocious star — we kind of find the dividing line to be at 23, 24. If you don’t put a lot of innings on your arm prior to 23, you can pretty much go at it and be a pretty resilient 190-to-200 innings pitcher pretty consistently in your late 20s and into your 30s

“It’s very difficult when you’re young and you feel great and you just don’t have any stop signs but to go out and do it.”

The Dodgers have put plenty of stop signs in the 20-year-old Urias’ path. In his first three professional seasons, he topped out at 87 2/3 innings (in 2014) and was shut down for over a month in mid-season the next season after having elective surgery on his left eye.

They did their best to limit him in 2016 as well, giving him extended breaks and moving him to the bullpen. Still, they couldn’t resist the temptation of using Urias for 127 2/3 innings combined between Triple-A and the majors, regular season and playoffs — a nearly 50-inning jump from his previous season and a total GM Farhan Zaidi acknowledged was “a good chunk over what we had planned.”

“There are definitely pitchers who had big workloads before they got to 24 who were abused or overused,” Zaidi said. “I think that’s part of why we’ve been so careful with this guy because when you have a young pitcher with tremendous upside who is a 0-to-2 (service time) and not making a lot of money, the temptation to get 200 innings out of the guy is great.”

With Urias likely to demonstrate this spring he is clearly one of the Dodgers’ five best starting pitchers — perhaps one of their three best — executing a conservative plan that limits Urias’ 2017 workload won’t be easy.

For the team or Urias, who will make his spring debut Tuesday against the Colorado Rockies).

“You can’t get mad at them. You can’t fight it,” Urias said through an interpreter. “You have to respect what they decide and kind of go with it.

“That’s my job — go out and pitch as good as I can and let them tell me what they want me to do.”

Whatever frustrations Urias feels at being reined in, he keeps them to himself. Dodgers manager Dave Roberts praised him for being a “faithful soldier” through all the stops and starts last year. And Boras has outlined the logic behind the decisions for Urias.

“What I do is just lay out the framework, saying, ‘You know some great, great pitchers — Fernando being one — their careers were not altogether meaningful after age 30,’” Boras said. “Dwight Gooden, a lot of these guys are very much shadows of themselves. The dominance is gone because they’ve thrown so many innings so young. The data just shows this. It’s full of numerous examples that this is just what happens.”

Urias acknowledged that he has had those conversations with Boras and “he talks about it with the team too, so I’m sure whatever they tell me is what they’ve talked about.”

The Dodgers are considering everything short of covering Urias in bubble wrap and locking him in a storage closet when they break camp in order to keep his workload down early in the season, saving his limited innings for the critical games of September and an anticipated deep playoff run.

Roberts mentioned the possibility of leaving the youngster in extended spring training to start the season, but that seems one of the less likely options. A more likely scenario would be for Urias to open the season in the rotation, but be skipped occasionally and have a strict pitch count and innings limit for each start, a way to put a governor on his overall workload.

“There is a certain benefit to doing that and just keep down the pitch counts,” Zaidi said. “Being in the rotation and having a couple lighter-load starts is an option.”

President of baseball operations Andrew Friedman said there has been “a lot of back and forth” on how to handle Urias with care.

“I think there’s no question he’s going to help us win a lot of games this year,” Friedman said. “He’s not to the point in his development where he’s going to make 32, 33 starts and pitch 200-plus innings. So exactly how we manage that and win is what we’ve spent some time talking about this winter. We’ll continue to talk about it this spring. We don’t know exactly, but it’s something that’s in the front of our minds.”