The normalcy of Clayton Kershaw’s appearance in the Dodgers’ Cactus League opener, his first outing since the sixth game of last October’s National League Championship Series, extended from the results on the mound to the self-assessment afterward.Kershaw... 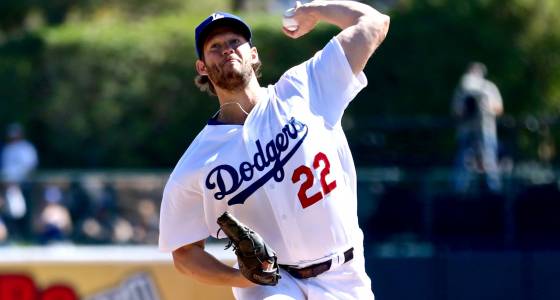 The normalcy of Clayton Kershaw’s appearance in the Dodgers’ Cactus League opener, his first outing since the sixth game of last October’s National League Championship Series, extended from the results on the mound to the self-assessment afterward.

Kershaw raced through one inning against the White Sox in a 5-3 victory on Saturday afternoon at Camelback Ranch. He faced three batters and retired all three. He struck out outfielder Melky Cabrera. The White Sox could not hit a ball out of the infield.

Shortly after his performance, Kershaw appeared in the Dodgers clubhouse. He described the one changeup he attempted as “terrible.” He mentioned how he fell behind in the count to each hitter. He expressed displeasure with his fastball command.

“When something doesn’t work in spring, I’m going to stress out about it and worry about it until I fix it,” Kershaw said. “I’m not just going to say ‘I’m going to figure it out at some point.’ Even if that might be the case, I feel like I have to harp on it and stress on it until I get it to where I want it to be.”

These are the standards Kershaw has set for himself. He did not lower them in the wake of the herniated disk he experienced last summer. Asked about his back on Saturday, Kershaw pronounced himself “all good.” He would like to consider the matter settled.

Dodgers officials cannot forget what happened with Kershaw in 2016. But thus far in spring, he has helped ease any concerns. Manager Dave Roberts complimented the cleanliness and repeatability of his delivery thus far.

“If we hadn’t known his history last year, we’d think nothing of it,” Roberts said. “He looks great. He obviously adjusted some of his off-season workouts, but he looks great.”

Kershaw began the adjustments as he recovered last summer. He was able to pitch in September and October. He finished the season with a 1.69 earned-run average, which led all starting pitchers who logged at least 100 innings. Despite throwing only 149 innings, Kershaw was the most valuable pitcher in baseball, according to FanGraphs’ version of wins above replacement.

He will headline a rotation that is deep but unsettled as March approaches. Rich Hill will start against Milwaukee on Sunday. Kenta Maeda takes the ball against Colorado on Monday. Roberts indicated he was not ready to reveal his starters for the two games after that. The last two spots in the rotation are being dangled as the prize in a competition among Scott Kazmir, Brandon McCarthy, Hyun-Jin Ryu, Alex Wood, Julio Urias, Brock Stewart and Ross Stripling.

Kershaw indicated he expected to throw two innings in his next outing. The presence of the World Baseball Classic has lengthened spring training, providing ample time for Kershaw to stretch out his arm. He threw 17 pitches in the bullpen following his inning Saturday.

Kershaw operated at an expedient pace on the mound. At 1:02 p.m., an appreciative cheer greeted his arrival. Two minutes later, he threw his first pitch. Four minutes after that, his work was done.

“The results were OK,” Kershaw said. “I got three outs.”

The only time Kershaw showed emotion was to castigate himself for his misplaced changeup to Cabrera. He had thrown several changeups, his uncooperative fourth pitch, during live batting practice earlier in the week. But he still has not mastered the offering, which he experiments with every spring.

“It’s always nice to see him out there when he’s competing,” Roberts said. “I know he’s probably going to lose sleep over that one changeup that he left out of the zone. But it was good. It was good to see him back out there.”

Wood followed Kershaw onto the mound. He allowed three runs and two hits across two innings. If he does not make the rotation, Wood could aid the bullpen — or he could be optioned to the minors.

“I thought Alex was fine,” Roberts said. “The fastball was good, had life. He gave up some hits, but there were some good breaking balls, some good changeups. I thought he was fine today.”