A day after finishing first and second in Saturday's Publix Gasparilla Distance Classic 15K, Babson Park's Austin Richmond and Jon Mott were back pounding the pavement in Sunday's half-marathon.5 Hours Ago3 Days Ago23 Hours AgoAnd they were feeling some... 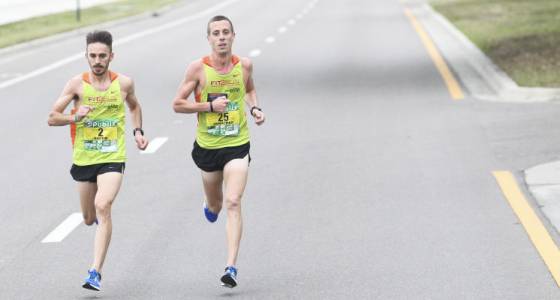 A day after finishing first and second in Saturday's Publix Gasparilla Distance Classic 15K, Babson Park's Austin Richmond and Jon Mott were back pounding the pavement in Sunday's half-marathon.

And they were feeling some pain.

"This is the last time I will do this," said Richmond, who finished Sunday's half-marathon in one hour, 9:17 minutes, good for seventh place. "I wanted to do (both the 15K and the half-marathon) because I wanted to be a part of our local races, but I don't think anybody would suggest that this is a good idea. I had no power today after yesterday's run. It was tough."

Mott, who is a neighbor and running partner with Richmond, finished eighth on Sunday in 1:09:52.

Benoit's run followed a solid performance on Saturday when she ran both the 15K and 5K races. In the 15K she finished atop the female grand master chart at 1:02:01 and was 17th overall in the 5K in 20:44.

Benoit, 59, said Saturday that she wanted to celebrate the Distance Classic's 40th anniversary and the "Treasured Chest Challenge," in which runners first compete in the DONNA marathon in Jacksonville, then the Gasparilla races back-to-back to raise money for breast cancer awareness.

The 40th edition of the Gasparilla Distance Classic was as big and strong as ever.

6,500 Registered runners in the 15K, and same number in the half-marathon

In addition to their standout performances in the half-marathon, the top 10 local competitors crossed the finish line with a little extra booty to spend.

Richmond was the top earner in the men's division, winning $2,000 for his seventh-place finish in 1:09:17. Behind Richmond, Mott earned $1,500 for finishing eighth. Bradenton's Dustin Spanbauer took home $750 in ninth, Jose Perez of Haines City received $500 in 10th and David Johnson of Brandon won $250 for coming in 12th.

On the women's side, Tampa's Kayla Atkinson and Becky Howarth were awarded $2,000 and $1,500 for their eighth- and ninth-place finishes, respectively. Wesley Chapel's Jenn Walton won $750 for finishing 12th, Jacki Wachtel of New Port Richey earned $500 in 16th and Terri Rejimbal, a Tampa resident, received $250 for an 18th-place finish.

The half-marathon and 8K again featured several standout finishes by the youngest and oldest competitors.