Did Kevin Klein already play his last game as a Ranger?

Kevin Klein, whose spot in the lineup would seem to be in jeopardy if the Rangers pull off a deal for a right-side defenseman, sat out his second straight game in New Jersey on Saturday in the aftermath of back spasms that first developed during Thursday... 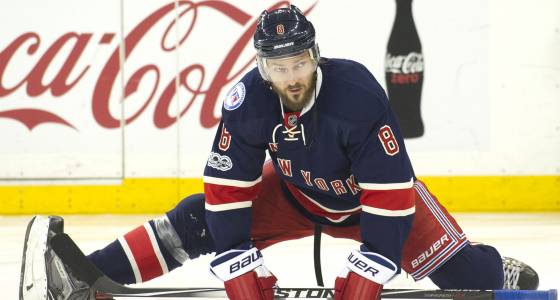 Kevin Klein, whose spot in the lineup would seem to be in jeopardy if the Rangers pull off a deal for a right-side defenseman, sat out his second straight game in New Jersey on Saturday in the aftermath of back spasms that first developed during Thursday morning’s skate in Toronto.

Coach Alain Vigneault said the veteran also would be sidelined for at least Sunday’s match at the Garden against the Blue Jackets. And as the Rangers are not scheduled to practice on Monday, that also would seem to rule No. 8 out of Tuesday’s game at home against the Canadiens, the final game before Wednesday’s 3 p.m. trade deadline.

Adam Clendening, who has played five of the last eight games and 14 of the last 21, had his second straight impressive outing as Brady Skjei’s partner on the third-pair in the Rangers’ 4-3 overtime victory and indeed scored the tying goal with 4:25 remaining in regulation. Klein, who has played in 54 of the Blueshirts’ 61 contests, missed the first three games of the season with a lower back issue.

Rangers’ medical trainer Jim Ramsay is conducting his due diligence upon reports that five Vancouver players have been quarantined after displaying mumps symptoms. The Canucks do not meet the Blueshirts the rest of season and neither do they play any road games in proximity to Ranger visits.

Rangers failed to score on their only power play, though they did generate five shots on net. Blueshirts are 1-for-23 over their last nine games and 3-for-42 over the last 16 with the man advantage.

Devils rookie Pavel Zacha was sidelined after suffering a concussion in Tuesday’s 2-1 defeat to the Senators. Zacha, the sixth-overall selection in the 2015 entry draft, has recorded 16 points (8-8) in 52 games. One-time Rangers defenseman John Moore was a healthy scratch for the second straight game for the Devils.