Atlanta Falcons running back Devonta Freeman doesn’t want to get caught up in a contract dispute. He just wants to take care of his family.Of course, Freeman, who turns 25 on Wednesday, wants to secure a long-term lucrative deal, particularly with two... 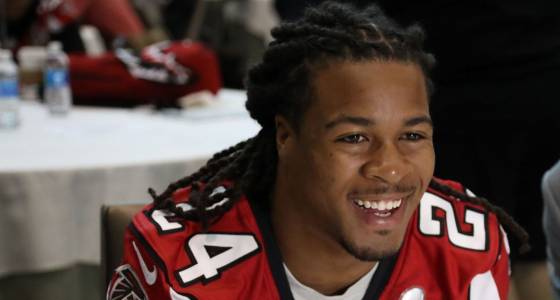 Atlanta Falcons running back Devonta Freeman doesn’t want to get caught up in a contract dispute. He just wants to take care of his family.

Of course, Freeman, who turns 25 on Wednesday, wants to secure a long-term lucrative deal, particularly with two Pro Bowl selections and consecutive 1,000-yard rushing seasons to his credit. In the bigger picture, Freeman reiterated the most important aspect is taking care of his family. His plan revolves around the four people he finally moved into his five-bedroom, Atlanta-area home this past weekend: his sisters Shinice, Keyuna, Clenice, and Jerniya.

"I want to pay for all of them to go to college," Freeman said. "Where I come from, school wasn’t as fun growing up. I want to try and show them and teach them that school is fun, if you do it the right way, if you go to school with a purpose. You have to have a purpose for everything in life. And when you get to see the results, it’s very fun."

Freeman attended Florida State and is working toward his degree in sports management.

"I’m still taking classes, and I know the importance of education," Freeman said. "A lot of people say, 'Put me on, put me on.' This is one thing I mean by putting your family on and giving them the opportunity to be successful. It’s not just giving them everything they want, it’s making them work for it and utilizing the opportunity. Bringing them here with me, they get to live like me, but at the same time, go to school and work hard for it."

Freeman, the oldest of seven children, grew up in the rugged projects of Miami and brought his sisters to suburban Atlanta to pursue better opportunities. Shinice, 23, wants to study photography. Keyuna, 19, plans to be a pediatrician or nurse. Clenice, 18, is in her last year of high school and is interested in cosmetology. And Jerniya, 5, still has plenty of time to figure out her future as her brother puts her through private school.

Freeman is in the process of figuring out which colleges Shinice and Keyuna will attend.

"I have some advisers that were at Florida State with me, and they’re at Georgia State right now," Freeman said. "Or to start off, it might just be community college. And I know some people at Georgia Tech. It’s all about where I can get the best opportunity for them."

Freeman said he has been wise with the money he earned from his rookie contract, which included a signing bonus of almost $500,000. He is now scheduled to make $1.838 million in 2017, the final year of his contract, based on an escalator. Ten running backs will make $4 million-plus in 2017, led by Pittsburgh's Le'Veon Bell at $12.083 million

Receiving a lucrative contract extension certainly will provide more financial security for Freeman and his family. He intends to bring his mother, Lorraine, to the Atlanta suburbs as well.

"On our end, we’re just patient. We’re just waiting for the right time. God knows my heart. I’m definitely doing this all to take care of my family and help others and even just put my family in a better situation. It’s nothing greedy or to be super-thirsty like, 'I need this, I need that.' I don’t play the game of football for the money. I play the game of football for the love. But fortunately, if you do good in football, you get rewarded very well. I’m going to take that, too. You’ve got to."