NEWARK -- There is no deal in place, but the Devils will sit defenseman Kyle Quincey for Monday's game against the Montreal Canadiens with the trade deadline two days away. There's no guarantee a trade will be made, but with the 31-year-old Quincey... 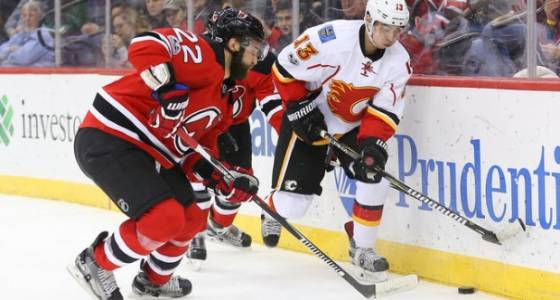 NEWARK -- There is no deal in place, but the Devils will sit defenseman Kyle Quincey for Monday's game against the Montreal Canadiens with the trade deadline two days away.

There's no guarantee a trade will be made, but with the 31-year-old Quincey on a one-year deal with the Devils, he's been the target of trade rumors throughout February.

Quincey doesn't know anything about a move yet, but he's bracing for one potentially happening.

"There's nothing right now. As of right now, had a good skate today, going to come to the game tonight," Quincey said. "I'm still on the Devils, that's where things are at. There's nothing done yet."

Forward P.A. Parenteau, another target of trade speculation, will also be out Monday, but he will sit after taking a shot off a finger in Saturday's 4-3 overtime loss to the Rangers. The Devils said he was day-to-day.

Devils coach John Hynes said the team approached Quincey about sitting him on Monday, keeping him healthy and available if any deal is made.

"It's only fair, the way we want to do business with the players, is to be up front and honest with what the situations are," Hynes said. "It's an opportunity to get John Moore back in, and we'll see how the next couple days play out."

It wouldn't be the first time Quincey faced an in-season trade. He was traded from the Colorado Avalanche to the Detroit Red Wings about a week before the deadline in the 2011-12 season. He said that deal was different since he went back to Detroit, where he played three seasons to start his career.

Quincey said sees the benefits of being traded to a team closer to the top of the standings, but added that it's always a tough situation to leave a team in the middle of a season.

"Pros and cons on both sides. I'm having a great time here, great group of guys," Quincey said. "So whatever happens, it's out of my control.

"I had a great year with these guys and it's not over yet, but if it is, I'm very thankful for the opportunity and the boys here."